In Which Cthulhu Ruins a Perfectly Lovely Party...

I'm very unhappy right now. The last two days, it has really been borne in on me that I have an incurable disease... treatable, perhaps, but a disease that will be with me for the rest of my life. I mean, I knew that, but I just didn't realize it, if you know what I mean. And if I wasn't already depressed, that would certainly depress me.

But then, I do have some experience with treatable but incurable diseases that don't show on the outside... I mean, I've been living in recovery for alcoholism for fourteen and a half years. But with the alcoholism, the treatment is simple and holistic... don't drink, go to meetings, do the steps. There's no chemical medication to screw around with, no doctor and pharmacist to see, no inability to function in the day-to-day world (at least there wasn't for me).

So I guess I'm going to have to work on moving from realization to acceptance. I thought I had accepted the bipolar disorder, but I guess I hadn't considered all of its facets and depths. Maybe I should think of a better phrase than "incurable disease"... how about "PermaNut"? Or maybe "The Eternal Consistent"?

?
So Dr. Shrinkimadink went all old-school on me and prescribed Lithium as a mood stabilizer. It's like the oldest psych med still on the market... and I figure if it's still around, it can't be that harmful, so why not give it a whirl?


Of course, it's a little early to tell if it's working, but in the five days since I started, it's manifested some side-effects already that I could really live without... I keep waking up in the middle of the night and am unable to get back to sleep. Worse, I had the most horrible and incredibly vivid nightmares on Sunday night.

With the waking up, the nightmares were divided into three distinct parts. In the first one, I was in a mansion with some people I didn't know, rather like the characters from Clue (the game, not the movie) but not exactly them; during the course of a week spent in this mansion (which was so vividly real that I could draw you a floor-plan of it), each night a malign creature from above reached down into the house with dozens of long tentacles (sometimes squidlike, sometimes metal), plucked one of the guests through a window or skylight, and then destroyed the part of the house we had been standing in. There was this terrible sense of hopelessness, of wondering when I would be next, trying not to get too attached to my doomed fellow guests, grieving for the destruction of lives and the beautiful house.

The second dream was the exact same story, in the exact same house, but more vivid, with more lifelike characters from movies and from my own writing. The malign creature was more specific and realistic, a thing from outer space with a zillion long tentacles and these huge claws (the only parts of the creature we ever saw...it was only after I woke up that I put the name Cthulhu to it, in the dream it was just there), and it didn't limit itself to one victim but rather plucked as many as it could from whatever ingress it could find, completely at random. And like I said, it was vivid... it was like it was really happening, the details were perfect, the horror was real, it was so terrible that it's haunted me all day.

The third dream was rather more dreamlike and surreal, but somehow sadder and more painful. There was another house, but this one was a huge overcomplicated Victorian by the sea, in which someone I loved was trapped (I didn't know who, exactly, I think it was Shiloh but it might have been one of my fictional characters); trying to get to him, I was being pursued by a malign entity that could assume any form and could alter my location, even the time... I would be in a room, and it would morph into another time and place in which something horrible was about to happen, and from which I had to escape before it happened. The entity would take human form and torment me in the shape of strangers and friends and family. And no matter how hard I tried to get to that room, I kept getting further and further away.

Anyway, it upsets me to just write about it, to remember it at all... but I've been afraid that if I didn't write it down, it would just haunt me, take up room in my mind, keep bothering me.

I hope this isn't going to be the usual thing with the Lithium... I will go stark staring mad if I keep having nightmares like this.

?
So anyway, what else is there to talk about? I had a really great day on Saturday, Caroline and Jason and I went to the RGDC King & Queen of Hearts Show. I was one of the emcees, so I couldn't back out at the very last minute like I've been doing, and so though I was feeling depressed and anxious all day, I went anyway.

And I'm so glad I did! I had a fantastic time; after a few minutes of near-panic anxiety, I just perked right up and did a great job emceeing, and had a very good time all evening. I usually do have a better time if I'm more involved in what's going on, that something I have to remember next time I'm feeling icky at an event... just get involved, and you'll feel better. 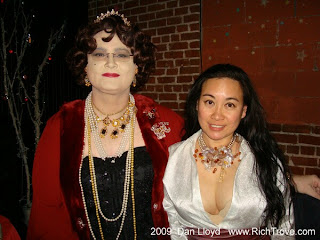 Unfortunately, I then spent Sunday in a complete crash, weary and weepy and suicidally depressed... not helped at all by the fact that it was pouring down rain all day. I tried to distract myself with reading, but the stories (short historical murder mysteries) seemed terribly sad; I put on a DVD, but the violence (I was watching the second season of HBO's Rome) made me even sadder. The whole day was just a ghastly mire of sadness... even comedies and porn made me sad. But oh, well. I didn't kill myself or anybody else, so I guess it worked out OK.

?
In other news, I am in the grip of a new obsession: kilts! 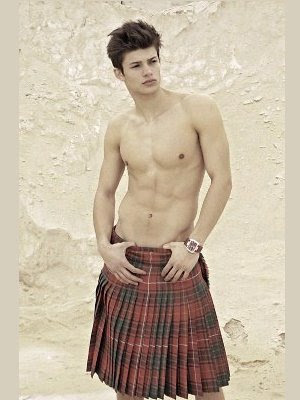 I was browsing around on the JUB message board, and somebody mentioned Utilikilts, how sexy and comfy they were, and there was a link to the website. So I went to the website and thought they looked kind of neat, but then I saw the prices... upwards of $150! So I went on eBay to see if I could find them cheaper (because that's what I always do when I'm offended by a price, regardless of whether I want the thing or not), and found that they still went for really high prices, even the used ones.

But while I was dawdling around, I started looking at traditional Scottish kilts, and suddenly got hooked on them. I learned a lot about plaids, particularly generic tartans that don't signify any particular family or clan, such as the Pride of Scotland, the Saltire, and various other such. I learned about lengths and construction and how and with what to wear kilts (such as the fact that the boy above is wearing his kilt wrong-way-round... the pleats go in the back!)

After a lot of shopping around and thinking things over, I ended up buying a plain black kilt, with matching hose and a Glengarry cap and a kilt pin and a rabbit-fur sporran. Then from another vendor I bought a long-sleeved black T-shirt with a gorgeous white Gaelic design on it, and a silver and amethyst thistle brooch for the hat. So far this little folly has set me back over $200, and I haven't even started on belts and shoes! I'm also looking at some other things to round out the outfit, hell a whole Scots wardrobe... Prince Charlie jackets and ghillie shirts and fly plaids and...oh, it's just endless!

But whence came this sudden and overwhelming fascination with all garb Scottish, I have no idea. The funny thing is, I'm not even remotely Scottish, not a drop of Scots blood in my whole body. My mother's adoptive mother was born a MacDonald, and I suppose I could claim that if I wanted to... though the MacDonald plaid isn't really to my taste (too much orange); and of course there are Irish tartans, which are by county rather than by name, and I have plenty of Irish ancestors.

And in case you were wondering... I intend to wear boxer-briefs under my kilt, despite tradition's decree that one wear nothing underneath. I'm all for traditions, but not when it means getting a breeze up my hoo-hoo.

So that's about it for me... I'll check back in next time I have anything of interest to say. Toodles!

Posted by Robert Manners at 7:26 PM
Email ThisBlogThis!Share to TwitterShare to FacebookShare to Pinterest