Second Life Is My Real Life.

I haven't written much lately, I don't read anymore, I never watch TV, I see few films... any time I'm not asleep, at work, or out of the house doing something else, I am on Second Life having a really good time. I have friends, I have favorite clubs, I have a house of my own (actually, I'm on my fourth house, houses are cheaper than clothes and only the land is expensive)... I even have a boyfriend, something the real-life me hasn't had in over two decades: my first sexual experience in nearly fifteen years is happening in pixelated cyberspace between my twink avatar and a vampire avatar belonging to a married bisexual somewhere in the middle of the country.

And as if that wasn't enough, I've recently created an "alt" (for "alternate character") named The Countess, a stunning 18th-century vampiress with a penchant for historical costume. She is not attached to the real me in any way, has no RL (Real Life) backstory, she only exists in the virtual world of SL. But she exists like crazy, she has a history of her own, tons of fabulous clothes and jewels and hairstyles (all black), her own friends and favorite hunting-grounds, and even her own distinctive speech pattern.

To make that little situation even more interesting, I have spent some time establishing the Countess as a separate individual from my main character, and so have been logged in as both of them at once, and have had both of them in the same place, interacting with each other and even carrying on conversations together in group chat. It's a complete mind-bender, keeping up with both avatars in two separate viewer programs and remembering who is who and which one of me said what, but it's a lot of fun... and those of my friends who know the Countess and I are the same person thought it was hysterically funny when we bickered on the dance-floor.

Here we are waltzing in a starlit fantasy ballroom... in matching outfits! 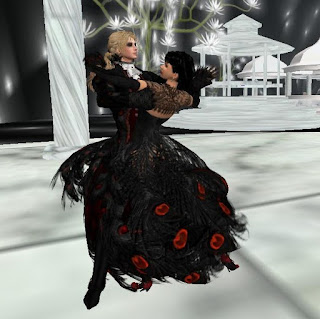 And here's a more staged effort with period costumes: 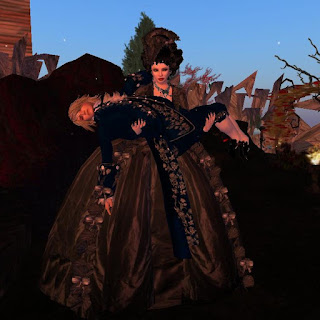 (Now I think of it, though, this site is linked to my main SL profile, so I may have just outed the Countess... oops!)

From my current perspective (at the office after work, away from the laptop and its connection to this realer-than-real-life life), it seems kind of sad. Pathetic, maybe. Possibly unhealthy. But when I'm plugged in and interacting with people, and having really hot cybersex with my vampire lover, and rearranging my furniture and trying on new clothes, it's the most fun I could ever think of having. It's better than real life because I can do it without fear or shyness, and I can do it laying in bed... no getting dressed or even brushing my hair required! Robbie the avatar can be dressed to the nines (or more likely undressed to the nines) while Robert the person can be lounging around in sweats eating cookies.

Though it worries me a little, my immersion in this alternate reality, I'm not going to worry too much about it... social contact is social contact, and when you've become as painfully demophobic as I have in the last few years, any social contact I can get is a good thing.

In other news, I've become deeply enamored of the band Florence + The Machine. Lead singer Florence Welch has the most arresting and amazing voice, physically strong and emotionally fragile at once, with just a dollop of crazy to keep you on your toes. The music is hard and driving yet lush and orchestral. The imagery of the videos is sometimes disturbing but always fascinating.

I'm reminded of the impact of The Eurythmics when they first burst onto the scene thirty years ago, Annie Lennox's unusual looks and amazing voice paired to the haunting melodies and bizarre imagery. It was very new, the way that Florence + the Machine are very new.

Anyway, their major hit "Dog Days Are Over" is my favorite song just now, and I always go into an absolute paroxysm of dancing joy when it comes around on my iPod or one of the Second Life DJs plays it. Wanna hear it? Of course you do!

Is that not amazing? Her other song that I love is "Kiss With A Fist"... like Billie Holiday's torch songs of the thirties, it describes a violently dysfunctional relationship, and makes you understand it a little bit and even identify with it somehow; it doesn't glamorize violence, but makes you feel the intensity of the love behind the violence... and does in an unexpectedly perky and fun-loving way.

My favorite video is for "Rabbit Heart"... it's so pretty (especially the curly-headed boy in the red jacket)! I like the song, too, but the video just gives me goose-pimples! It's a little bit hippie, a little bit Ren-Faire, a little bit steampunk, and just visually delightful.

So that's what's going on with me these days, and why you've been stuck with Simon Nessman's mug at the top of the page for over a month (it must have been terrible!) I hope to be able to do more writing in coming weeks, if only to keep you up-to-date on my glamorous virtual social life. In the meantime feast your eyes on this: 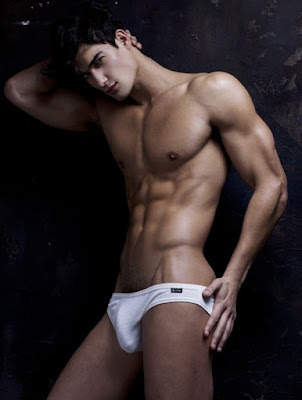 Posted by Robert Manners at 5:30 PM
Email ThisBlogThis!Share to TwitterShare to FacebookShare to Pinterest