I realized recently that I am, and have been for the last few months, reinventing myself. I've been adopting new things that I never thought I'd want to adopt, and discarding old things that once meant a lot to me.

For example, I notice that I am embracing my age... and even striving to seem older than I am. It started with the glasses (seen here): needing bifocals inspired me to get classic black frames that I once would have dismissed as "too old," a fifties' style that make it obvious from a hundred yards away that I'm wearing glasses... rather than the wire-frames I've always worn in hopes of diminishing the appearance of age.

Then there's the beard (also pictured). I've had a beard before, but I would always tweak around with the gray in it, dyeing it or shaving it off when I wanted to look younger. It adds ten years to my appearance, or more precisely makes me look my actual age and maybe a couple years extra. Yet people seem to respond more positively to me when I have my gray beard, people smile at me more, and people are now telling me that I look not only distinguished but actually sexy.

And now I've started walking with a cane. It started with buying one for a costume, a regency-style dome-topped affair that I got on eBay for something like forty bucks while I was working on my next several costumes (after the last post about my Louis XV outfit, I saw Beau Brummell: This Charming Man, a not very good and wildly inaccurate biopic of the famous dandy starring the incredibly schmexy James Purefoy; I followed it with Regency House Party, one of those weird Brit "reality" shows where people try living in a different century; and I was soon completely in love with the Regency style and started working on assembling some wardrobe).

Anyway, I was futzing around with this walking stick around the house, and wore it out when I went to Solace, discovering that it made getting around a hell of a lot easier... I didn't even have to lean on it very hard, just having it in hand helped my balance and relieved the pressure in my ankles, knees, and hips. Getting in and out of chairs was suddenly no longer a painful noisy chore. But the stick was a little short, I found myself leaning a bit to the side, which simply transferred the discomfort from my lower body to my hands and shoulders.

So I did some research, and found out that the correct height for a cane should be half your own height, rounded up to the nearest inch, or should reach your wrist-bone when standing up straight and letting your arm hang loose at your side; since I'm 75" tall, the correct height would be 37.5 or 38 inches. To test that out, I started using two of Grandmother's canes, adjustable ones that I could bring up to a 37" and 38". As promised, the 38" one was the most comfortable.

And so I've been walking around all week with a cane, at work and at home, and I absolutely love it! I had to get past the initial reactions from coworkers and clients, who would be startled by the sight of a cane and ask me with great concern how I'd injured myself; but once I explained that I was just trying out a possible remedy for an existing depression-related joint-pain condition, they moved on to asking me how it was working.

Of course, some more shopping is required. Since the elegant one I bought was too short, and Grandmother's spares are all tubular aluminum with joins and sizing buttons and not-very-attractive handles, I immediately started trolling eBay and other internet sites for elegant canes that are tall enough for me. But it hasn't been easy: the tallest standard is 36", and most canes are 34" (which makes sense, since the average American is 68" tall), so it took some doing to find canes that were tall enough and classy enough for me.

I've bought two so far, one a handmade cane in black-stained Virginia hemlock with a black marble Victorian doorknob as a handle, and another black ash stick with a chrome-plated two-headed eagle handle. Neither has arrived yet, but I'm looking forward to getting them and trying them out. There is a rich variety out there, even with my non-standard height requirements (though a standard height would exponentially increase the possibilities), so I suspect I'm starting a new collection.

I think the next step will be a pipe... but I can't smoke one, so it would just be a prop; and I've always found props tedious when performing. Or maybe a different style of hat... I've been wearing "newsboy" caps (or golf caps or apple caps or eight-quarter caps or whatever you want to call them) for a few years now, maybe it's time to graduate to a nice fedora or panama? But I've had trouble with shaped hats in the past, I throw them in the backseat of my car or my trunk and they get squashed. I don't know.

And then there's something else: I simply do not want to do drag anymore. I feel like I've milked all the fun out of it, and it's no longer something that makes me happy. In all my eBay expeditions, I've not been remotely interested in female costumes or jewelry or wigs. I look at them, but they spark no interest. I don't know if this is a permanent distaste for my drag persona or just a lack of interest due to taking so much interest in new masculine realms of costume and jewelry, but I have a weird feeling that I'm done with Marlene. I'm not going to give away all my gowns and jewels just yet, though... I'd hate to get rid of everything and then decide I want to be Marlene again.

This is a little unsettling but very exciting, this business of self-reinvention. It's also rather expensive: I've overdrawn my account four times in the last three months. I mean, no sooner did I finish one costume than I was launched into two others (proper Regency and sexy Goth), and not very far into those realms before I started on the walking-sticks. I have about four hundred dollars worth of eBay items on watch that I plan to get with my next paycheck (a three-piece suit, some really massive rings, and another cane). And now I contemplate pipes and hats?

Yeah, well, I never claimed to be sane. But I say the results are worth it (this is what I wore to Solace last weekend, and I looked fierce, if I do say so myself): 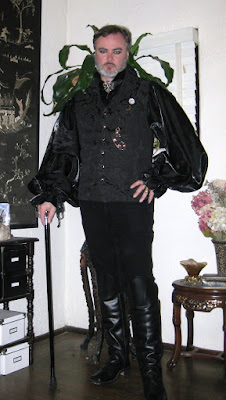 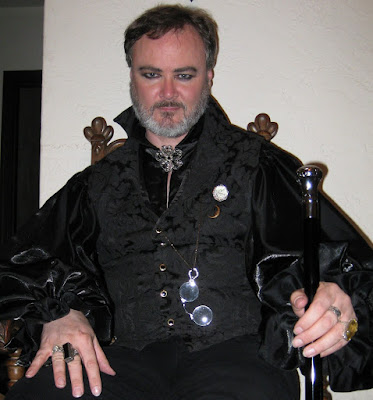 I'm also inspired to start taking more care with my everyday clothes. The cane and beard do not assort well with my old "collegiate casual" khakis with a t-shirt and v-neck, or polo shirt on hot days. I'm starting to think tailored vests with collared shirts, blazers instead of hoodies when it's cool, maybe a loose necktie or even an ascot. With a panama hat and a cane? I'd be rockin' that old-man mojo!

Well, something to think about, anyway. I'm still trying out various costume vendors for the waistcoat thing, for my Regency and Goth outfits, and possibly for everyday; the custom-tailored one I wore in the picture above was great, but it was kind of pricey at $120, if I'm going to wear waistcoats every day I'm going to have to find something cheaper. Of course waistcoats have to be one of the things I need to have tailored, since I have an unnaturally long torso and most vests are made to standard sizes that are three or four inches shorter than I need.

Anyoldhowzle, that's me today. Check back in a few weeks to see who I am then. 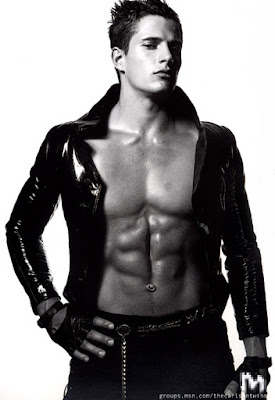 Posted by Robert Manners at 9:52 AM
Email ThisBlogThis!Share to TwitterShare to FacebookShare to Pinterest