I did say I would write more about what's going on in my life, but... well, I guess I lied, didn't I. The previous précis is enough... the details aren't really that interesting or important.

So, I still have that cold I had last week. It's lingering rather tenaciously, no matter how much sleep I get or how much zinc I take or how much orange juice I drink, it just won't go away. But at least I don't have all that bad of symptoms... the same cold is making the rounds here at work (I've decided that the company picnic was Ground Zero, only those who were there have come down with it), and several people have had to take a couple of days off. I have wanted to stay in bed, but I always somehow manage to have the energy to get to work and stay there all day. Which I think says a lot about how much I'm loving my new job.

?
You know, Carol Channing was an amazing performer. I came across the above YouTube from Alice in Wonderland while looking for something else entirely, and the lyrics seemed to suit how I feel today (yes, I know... go ahead and pity me). I hadn't seen much of Miss Channing's performances, though... just her role in Thoroughly Modern Millie and a guest spot on The Muppet Show were about all I'd seen (aside, that is, from talk-show appearances on which she appeared to be unbearably daffy).

So I spent some time looking through things that had been posted to YouTube, and developed a deep admiration for her as a performer. This video, which came from The Dean Martin Show and features a song originally from the Broadway musical Mame, its lyrics altered for a newer setting, is absolutely amazing:

Well, it amazed me, anyway. The lead dancer was pretty hot, too.

?
I'm getting very excited about the upcoming elections. I ordinarily just make up my mind early on, usually before the conventions, and then ignore the whole thing until I vote in November. But after hearing Barack Obama speaking, I'm hooked. He's amazing! Galvanizing, even. Even the Grandmother, who hasn't voted Democrat since Carter (though she's still registered as a Democrat, she's been voting Republican for years... mostly due to her fear of taxation and distaste for other people's ideas about morality) was visibly impressed by the speech he made in Minnesota. And then we were watching the DNC...

No, wait... Grandmother was watching the DNC, but she was watching it on Fox News, which I wasn't about to let happen, so I changed the channel to C-Span and didn't tell her, so we both ended up watching the DNC without idiotic commentary from right-wing "pundits" and left-wing lunatics (that's Fox's MO, you know... the liberals on their shows are always kind of whiney or downright crazy, and they have a couple of right-wing crazies like Pat Buchanan come on so that they don't look too biased).

So anyway, back to what I was saying... I was watching the DNC when Joe Biden accepted the nomination for Vice President, and I was deeply impressed by his speech. I was also deeply impressed by his son's eyelashes, but that's neither here nor there. And I could tell that Grandmother was impressed, too... and then when Barack came out for an impromptu appearance and electrified the audience even further, I felt Grandmother reluctantly coming back over to the light side.

Then, a few days later, when I heard about McCain tapping Sarah Palin for his Vice President, I was ecstatic! Grandmother absolutely loathes female politicians... she thinks Nancy Pelosi is the Antichrist and has never had anything nice to say about Dianne Feinstein or Barbara Lee. She didn't even like Anne Richards, despite her deep-seated love of all Texans.

Unfortunately, they're all Democrats and this lady is a Republican as well as a wife and mother and all that jazz; further, Palin seems to be running a purely Pro-Life platform, and that will sway the Grandmother... she is horribly against abortion.

And yet, like most of the pro-lifers I've ever talked to, she's also pro-war. That never made any sense to me.

?
Okay, it's time to change the subject... I get rather antsy when I talk politics, so no more political speech from me (except this... some wag on NPR has taken to calling Mrs. Palin "Caribou Barbie"... that's funny!)

So what else is going on in the world? Not a hell of a lot, I guess. So let's have a little beefcake, shall we? 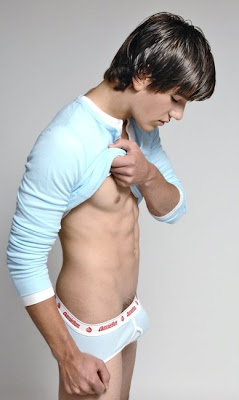 Posted by Robert Manners at 9:54 AM
Email ThisBlogThis!Share to TwitterShare to FacebookShare to Pinterest