My employer-paid medical benefits kicked in this month, so I made an appointment with the same GP I had when I was a Kaiser member before, just for a general checkup. Kaiser Permanente has made a few improvements to the way they make appointments, by the way, and I got an appointment two days later (last time I had to wait five weeks). Well, anyway, I got to the appointment on time, with a list of questions to ask (fatigue, gas, and arthritis), mentally prepared for all sorts of indignities like partial nudity and/or a prostate exam (which one would think I'd enjoy, but noooooooo).

So there I am sitting on the paper-lined bench, reading an ancient copy of Runner's World (the only magazines in the office), and in comes the doctor... and my jaw hit the floor! Now, I chose my doctor partly for his looks in the first place (I'm shallow like that), and I've met with him before, so I knew he was good-looking and had a sexy foreign accent; but he had heretofore always worn a white lab-coat and a tie and generally looked like a doctor. But this time he was wearing tight navy blue slacks and a charcoal-and-navy ringer-tee on his SERIOUSLY ROCKIN' BODY.

I don't know what he's been doing with himself during the twenty months since I last saw him, but he was effing hot. The man is in his mid-fifties, maybe even early-sixties, but the chiseled pecs, tiny waist, and bounce-a-quarter-off-it butt (not to mention the shiny gold hair, glowing bronzed skin, and glittering clear blue eyes) were what one might expect on a twenty-year-old. I was so dazzled and stunned that I quite forgot to ask about the fatigue and the gas (though he did refer me to an osteopath about the joint pain).

Something tells me that I'm going to get sick a lot in the near future. ;-)

Actually, I am healthier than I was when last I saw him... my blood-pressure has returned to normal (it was slightly high last time), my circulation is good, and though my triglycerides are still through the roof, my cholesterol is great. He wants me to lose some weight and get into a cardio exercise program at least three days a week to improve my muscle tone and get those nasty triglycerides under control (so it's back to the gym for me)... but for my age and weight, I'm in pretty good condition.

And I didn't have to take off my clothes, nor submit to a prostate exam (though I must say I was a trifle disappointed, seeing as how thoroughly I cleaned up for possible inspection).

?
In other news, I have become completely addicted to the TV show Dancing with the Stars. I've always been a casual fan of ballroom dancing, but I tend to not like these shows where people are critiqued and eliminated... they seem so mean (even my second-favorite show, Project Runway, gives me a qualm about that... I get so sad when Heidi says Auf Wiedersehen, especially if it was one of the contestants I like).

But one Monday evening the Grandmother and I were sitting at the table after dinner; I usually leave the table after Jeopardy!, or maybe Wheel of Fortune if there's a cute guy on, but this time I was working on the Sunday crossword and so stayed at the table later than usual.

And while I sat there trying to think of a five-letter word for "Tahitian currency," the season premiere of DWTS came on, and I got hooked immediately: I mean, I like Lance Bass (I don't know if I'm more interested in him because I now know he's gay, or if the coming-out process made him more interesting), and I adore Cloris Leachman, so they were reason enough to watch; but right there at the beginning they had Cody Linley dancing... those of you who don't have young people in your homes (or who have better things to do with their lives than watch Disney Channel even when there aren't children around) probably don't know this Hannah Montana cutie. I recognized him from the show, on which I thought he was kind of pretty but rather goofy with much-too-large features on a rather small face; but I have to tell you, that boy has gotten gorgeous in the months since his last HM appearance, since turning eighteen, since reaching his full and impressive height. 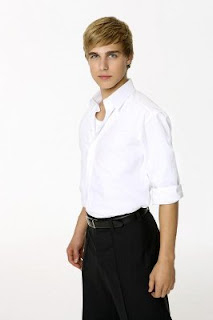 So yeah, now I have this huge horrible crush on Cody Linley, and though I enjoy watching Lance and Cloris and the other celebs hoofing it in front of the live audience (oh, and I guess a couple of the pros are fun, too), I only keep watching for Cody. I am deeply ashamed of myself.

?
So having developed crushes on someone old enough to be my father (if just barely) and another one young enough to be my son, I find myself feeling a trifle confused. Maybe I need to find someone hot of my own age to fantasize about, and I'll have The Three Ages of Man. Maybe I'll have to start watching Grey's Anatomy so as to drool over the incredibly sexy Patrick Dempsey, whom I know is only twenty-three months older than I... unfortunately, I tried watching Grey's Anatomy the other night, as it comes on right after my fave show Ugly Betty, but I just couldn't get into it. Medical shows tend to bore me. Maybe if they kept Patrick onscreen and shirtless at all times, I could stomach it? 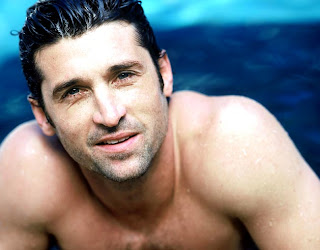 ?
So let's see... what else is new? Oh, yeah, my new office got redone last weekend, and it's gorgeous! New furniture, new paint, new layout... here's my desk BEFORE (this was right before the redecorating, my desk wasn't usually this bare): 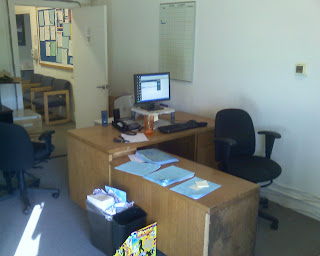 And now (ta-daaaah), my desk AFTER: 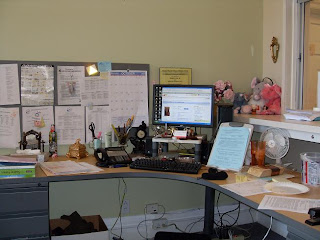 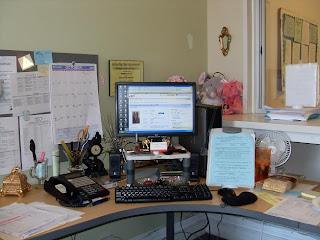 Isn't she pretty? The walls are this incredibly soothing sage green on one side and an equally soothing creamy-beige called "Navajo White" on the other, and my desk is on the other side of the room so I can see out both windows at once. I also get a cross-breeze right over my desk, so I'm always nice and cool.

The Before picture was taken with my cell-phone, but the After pix were taken with my brand new camera (which I couldn't really afford but had to have anyway, a Samsung L100 in glittering bright red); after taking pictures of my new office space, I also took pictures of the building... this is a great view, and if you had it in full resolution (which I am not posting, both for privacy reasons [the pic is so clear you can read the license plate numbers] and for bandwidth reasons [the full-size pic is just over 2mg]) you could see one of my coworkers trying to break into her own car. 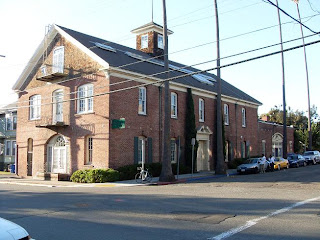 ?
Well, I guess that's enough out of me for the time being. I'll definitely be back before the end of the month to show you my Halloween costume. In the meantime, here's a tricky little treat for you (by way of Vera's Big Gay Blog): 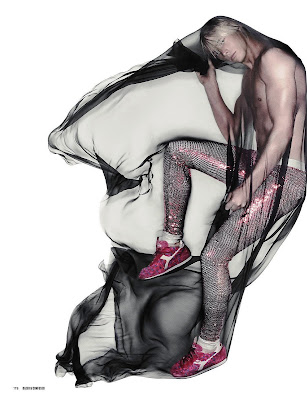 Posted by Robert Manners at 9:46 AM
Email ThisBlogThis!Share to TwitterShare to FacebookShare to Pinterest