Things Are Looking Up!

Wow, am I glad that's over! The depression, I mean... the rest of my life is still in pretty much the same place, but without the depression painting it black, it's all so much more manageable! Thanks for the well-wishes after the previous kvetch-fest, guys! It really does help to know that people are out there, caring.

?
So today is my and Caroline's 25th Anniversary. We've been friends for a quarter of a century! Ever since we started sharing a locker in sophomore year of high school. We've had some hiatuses (hiati?) in that time, some periods where we didn't see each other much, some relationships that took us a little bit away from each other; but we've never lost touch, and in the last few years we've become incredibly close. I am extremely grateful for Caroline every day.

To celebrate, we drove down to Carmel by the Sea yesterday for some very luxe window-shopping (they have a lot of estate jewelers in Carmel, as well as furriers, art galleries, and a rock-shop containing some really spectacular geodes that had Caroline salivating all over the place), enjoying the rather Druidic weather on the drive down the coast, stopping for snacks here and there. Then we had dinner at one of our favorite coastside restaurants, Sam's Chowder House in Half Moon Bay, where they have the absolute best clam chowder in the world. The rest of their food is great, too, of course, and the service is exceptional. They also had a live band playing (rock/jazz, a little too loud for my tastes, but very festive).

We took some pictures, particularly of the magnificent opera-length Swarovski crystal necklace Caroline made for me, but they haven't been developed yet... instead, here we are celebrating the anniversary two years ago, at the historic Webster House in Alameda (which serves a kick-ass high tea): 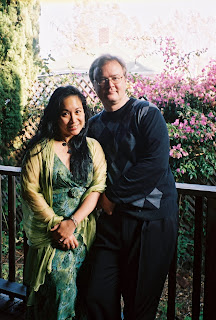 ?
In other news, I have been attending some coronations in my effort to become more involved in the Court... two weekends ago I went to Sacramento's Grand Ducal Coronation, which was held in the really gorgeous back complex of Faces nightclub. I thought I looked pretty fierce, but nobody took a picture of me (and my camera is broken, I have to get a new one lest I lose more fabulous outfits to the mists of memory). I had a good time, though, chatting with Mama Portugal and Bill Bailey, SoHorny Beaver and Jimmy Alvarado, Ella Gant and Rich Ragnow. I didn't really know anybody else there, though (aside from the adorable Wesley, whose blog I recently added to my list), which is something I'm going to have to work on... I'm not much of a social butterfly, being ridiculously shy about talking to strangers.

Then the next weekend (last weekend) was San Francisco's Grand Ducal Coronation, which was held at the deliciously campy Swedish-American Hall on Market Street near the Castro. I went over with my good friends Angelique deVil and her partner Damon, who is my counterpart in this Reign as Crown Baron (did I mention that I am Crown Baroness? I think I did), and we had a great time getting ready together in their hotel room.

Of course, we ran late... we always do. But even after being shamefully behind schedule to start with, and then my having to park a zillion miles away (this was the night before Folsom Fair, you know, so the Castro was packed... I ended up parking at Market and Gough, over a mile away), we made it to the Hall just in time for our Walk! And I have to tell you, I looked fan-freaking-tastic! 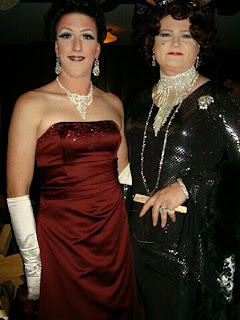 This picture doesn't do the dress justice... it's full-length, with a sweeping trumpet hem and just a bit of a train, made of a material so blindingly sparkly that I felt like a disco-ball. You can't quite see my tiara, nor my rhinestone-studded shoes. I was The Personification of Bling, I tell you!

Oh, yeah, Angelique looked nice too ;-). I really do need to get a new camera so that I can get full-length pictures. Not much point in spending that much money on a full-length gown and not getting pictures of its full length.

I knew a lot more people at that event, since more of our own Court were there, and the San Francisco Courts overlap a good deal with San Francisco performance venues... so there were some familiar faces in the crowd, notably Pollo del Mar with whom I have a number of mutual friends. I also ran into Bill Jennings, late of Mermaniac fame, and though I didn't get a chance to sit and catch up with him, it was nice to see him and his partner there.

Also the same night was the Living Sober Fall Follies... by serendipitous luck, the venue for that event (the surprisingly elegant Everett Middle School on Church and 16th Streets) was only three blocks away from the Coronation event, so I was able to attend both. Again my timing was perfect... I was scheduled to be halfway through the second act, and I arrived exactly at 9PM, just before the second act started, giving me plenty of time to catch my breath, touch up my face, go potty, and schmooze a bit with old friends Ivy Drip, Cookie Dough, and Madasin Hatter; I also got to chat with Mary Regan, Liability, Sue Nami, and Barbra Jo Peterson.

After that, I went back to the Coronation, where I just missed the Final Walk performaces from Grand Duchess Big D and Grand Duke Oliver with a Twist; but I did get to sit and chat with Cindy Z and Tim Ava and some other Court folk, and watched the crowning of the new Grand Duke and Duchess, Carlos Medal and Landa Lakes. Then I schlepped back to my car (1.3 miles, according to MapQuest), then back to Angelique & Damon's hotel (where I got back into boyclothes and they changed into leathers for the exclusive Magnitude pre-Folsom event), then back home and finally to bed.

And if you think I wasn't in serious pain for several days after walking about four miles all tolled, in pumps that were slightly too big and a corset that was way too small, you got another think coming! I still have bruises on my waist, and the blisters on the balls of my feet are just now callused over. But it was totally worth it... I had such a great time, I'd happily do it again! (Though if I did it again, I'd bring a pair of walking shoes for sure!)

?
So anyway, those are the big highlights of my life lately. The rest of The Life continues to putter along... I'm still not finished with my filing project, there have been so many interruptions and the creation of new files is taking longer than I expected; but I will get there, and hopefully within the next week. My health insurance has been activated, so I can start making appointments... I need to see a GP about this fatigue issue, and I need to see an eye doctor about getting new glasses (and maybe some contact lenses), and I need to get on board with a psychiatrist so that my Prozac supply doesn't dry up. My money situation is still bothering me, but at least I made my very final car payment... Miss Jane is now ALL MINE and I have the pink-slip to prove it! That will make things a little easier in the coming months, not having the car-payment expense anymore.

And so life goes on, tralalala, and I'm enjoying it for the most part. 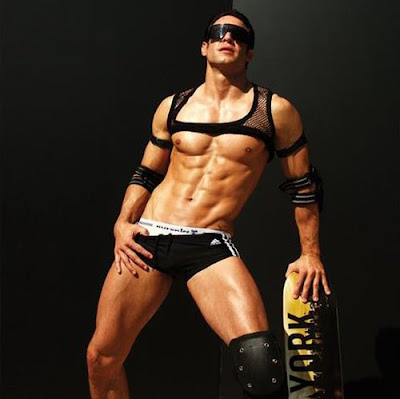 Posted by Robert Manners at 9:44 AM
Email ThisBlogThis!Share to TwitterShare to FacebookShare to Pinterest