I loathe and abominate Daylight Savings Time. It serves no purpose but to confuse and disorient people... particularly me. I always spend the week after DST starts or ends wandering around in a fuddled daze, unable to sleep properly, unable to eat regularly, unable to connect to this new temporal reality.

Making things worse, we had a blackout here on Sunday... large chunks of the East Bay went without power for an hour or more. So when I went around changing the clocks after the power came back on, I also changed them for DST, and confused the two in my mind.

My alarm clock in particular confused me: at first I forgot to turn the alarm on, so on Monday I overslept and had a hard time getting my day in order; the next night I turned the alarm on, but discovered after oversleeping the next day that I had the AM/PM setting wrong, and the clock thought morning was night; the third day, I got the AM/PM right and set the alarm, but completely forgot that when the power went off, the alarm reset to midnight, so that's when the damned thing went off... and I was so disoriented after only two hours of sleep that I hit the snooze button four times before I realized that it was still the middle of the night, and then I didn't think to reset the alarm so it would go off at the correct time and overslept again.

Well, let me tell you, friends... interrupted sleep and rushed abbreviated mornings make for a very grumpy and woozy Robert. I got very little work done this week, and considering that I am falling very far behind now that I don't have a filing intern to do the grunt work for me, I have managed to paint myself into a corner that is going to take a lot of concentrated effort to get out of.

On the other hand, I am catching up with the NaNoWriMo... I went from being ten thousand words behind schedule last Friday to being only six thousand words behind today, and gaining fast. I guess the disconnect from daily reality made it easier to enter Danny Vandervere's reality, so I got some solid writing done each day, meeting or surpassing my recommended daily average (1667 words) from Saturday to Tuesday. But then I fell behind again last night, I was so tired after work I just pooped out when I got home and didn't get anything more written.

Instead of writing last night, I watched The Imaginarium of Doctor Parnassus, which was one of the weirdest movies I've ever seen. Movies in which one of the stars dies during production are always very disjointed, with the various workarounds that come into play to finish the film without one of the stars; Heath Ledger died while the movie was being made, and restructuring the film around the scenes he'd already filmed made the whole movie jumpy and rather random. But it was visually interesting, though nothing ever really made proper sense.

I also have Tim Burton's Alice in Wonderland to view, about which I am very curious but also a little hesitant: some of the imagery, particularly regarding the Mad Hatter and the March Hare, are very disturbing. But I always end up liking Tim Burton movies in spite of myself, so I thought I'd give it a chance.

And completing the triad (I always buy movies in threes), I have Savage Grace, starring Julianne Moore and Eddie Redmayne; I love Julianne Moore, I could just watch her walking around and talking without any kind of plot, she's so hypnotically beautiful; and then Eddie Redmayne is so unusual-looking, sometimes you think he's beautiful and sometimes you think there's something desperately wrong with his face, and you go back and forth between attraction and revulsion. The story looks interesting, about an epically dysfunctional mother and son relationship in high society, so there are fascinating tensions and great costumes... I first read about this movie in Vogue, so I'm expecting the usual fashion orgasm.

So that's my plan for my Veterans' Day holiday... in my jammies, two movies, and as many words as I can squeeze out of my imagination... hopefully six thousand, though I will be happy with three. After all, there's a weekend coming.

So far as I can tell, there hasn't been any repercussion from missing four days of Seroquel last week... though that might be the genesis of the disorientation and disconnection I am feeling, which I have blamed solely on DST. But the mood itself is good, I feel quite emotionally steady, no sudden rages or unexpected tears.

In closing, please enjoy the following spot of loveliness: 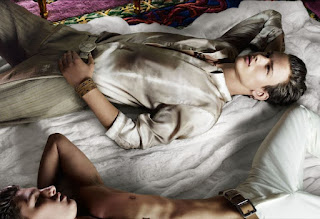 Posted by Robert Manners at 10:22 AM
Email ThisBlogThis!Share to TwitterShare to FacebookShare to Pinterest