How Many Lives Do I Need?

So, part of this season of silence from me is my current obsession with the role-playing "virtual world" Second Life. It's always something with me, isn't it? If it's not the Sims, it's eBay, and if it's not eBay it's FaceBook, and now it's Second Life.

Of course, I have come to it rather later than everyone else. A quick informal poll at JUB taught me that Second Life is so fifteen minutes ago, as passé as MySpace and catching up with Friendster for moribundity.

Nevertheless, I am enjoying the hell out of it. Exploring new virtual environments is the most fun I've had, as some of the "sims" (for "simulations") are incredibly detailed and quite beautiful; then of course there's shopping, for body-shapes and skins and hair and clothes and accessories; and then becoming involved in a vampire clan has provided a certain amount of sociability, though I sort of wandered passively into the Renegade Immortals, which is predominantly straight, rather than shopping around for a LGBT clan.

The social aspect, however (which is very much like a chatroom... someone described Second Life as nothing more than an elaborately animated chat application), has been a little difficult for me. I mean, virtual life is supposed to relieve one of such impediments as shyness and low self-esteem; but I find myself feeling just as awkward and scared in virtual social situations as I feel in real social situations... my avatar alter-ego is much prettier and dresses sluttier, but still has all the neuroses of a doughy, introverted old queen.

But I am slowly becoming more connected with individuals, both in my vampire clan and in the gay sims I've discovered. I go to a lot of simulated clubs and "dance" to the music (allowing a local program to animate my avatar), finding songs and artists I really like and have never heard of before. But above all, I love the shopping for clothes and accessories, putting together an identity that is separate from my own and interesting in its own right.

When I first joined up with a free account, following a link from FaceBook on New Year's Day, I wasn't really plugged into the alter-ego concept of avatar creation, so I just took a standard avatar and played around with it a little, editing shape and hair and then finding freebies and adding them. On the third day of playing, after kicking up $20 for the premium account (so I could access adult content), I encountered a vampiress who inducted me into her clan and made me a vampire. At these early stages, I looked like this: 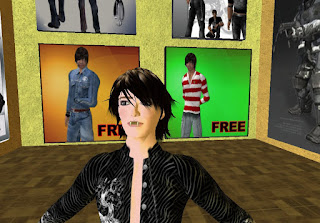 ...so new I didn't even know how to hide my fangs! But within the week, since I was now a vampire and vampires can't go around looking like trash, I'd bought a new shape and a new skin and some nice clothes and hair, aiming at an aristocratic goth look that I felt became a newborn vamp. To do this I had to buy "Lindens" (or L$), the monetary unit of Second Life; and since the exchange rate is something like L$750 for $1 US, it doesn't feel like real money... though I managed to blow through another $20 worth of Lindens in a week.

But the results, I think, were worth it: 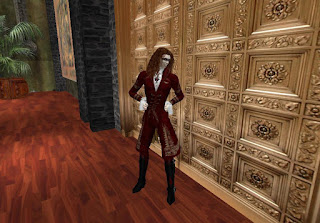 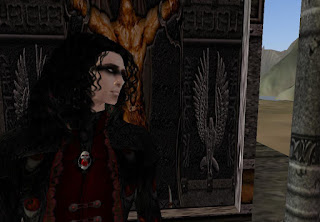 Then I sort of forgot about the whole thing for a while. Being a vampire meant that I had to bite people or other vampires in order to keep my vital blood level at full; and every day that passed, I lost a half a liter to "the curse." Since I was still too shy to go around asking strangers for half a liter of blood, I bought this medallion that would keep the curse at bay for thirty days; and since I had thirty days with no need to do anything, I let myself get involved in other things and didn't log on for quite a while.

So when I came back, I was very nearly dead, since my thirty days had elapsed and the curse had me down to a tenth of a liter. Knowing that nothing had changed with my shyness issues, I asked my liege mistress (the vampire who brought me into it) if I could become human again... but since I wanted to remain in the clan and didn't want her to lose any status from owning my soul, I became a "blood doll." That way, vampires could bite me with my consent and then I could go buy an apple for L$14 (less than a tenth of a cent) and be all better.

And of course this new status required a new look with new skin and new outfits. I was still in love with the formality, and had been buying rather formal outfits more than casual or sexy outfits all along; and so now I just went with something a little more modern, but still goth and rather sensual: 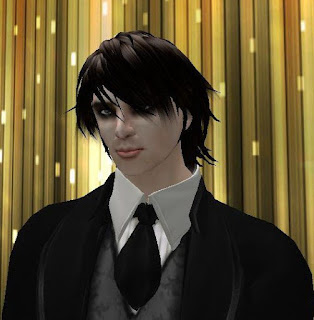 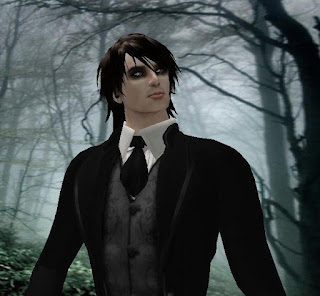 As I traveled around and met people and learned more about SL, I was introduced to the idea of playing out your own fantasies in this world, making your avatar into something you wish you were, or wanted to be once, or just completely different from what you are. And since I always wished I was cute and small and pretty, boyish and vulnerable, I started experimenting with "twink" and "femboy" shapes and skins and hairstyles. I changed my display name to "Sebastian" (I had gone in under my own pen-name originally) and started exploring the idea of being the pretty and vulnerable little man I am in my fantasies. 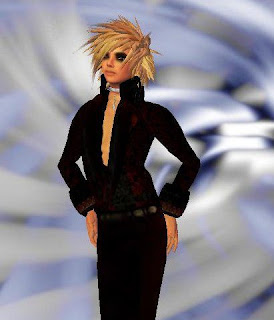 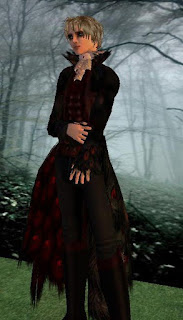 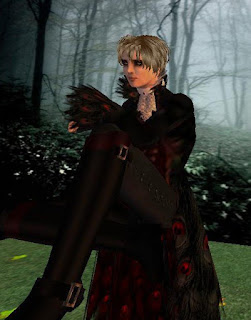 Well, there's this fine line between pedophilia and ephebophilia, but not a lot of people observe that line (one wag of my acquaintance put it: "An ephebophile is a pedophile with a thesaurus"), and I did not want to make people uncomfortable or attract actual pedophiles to myself, so I went back to that first bought shape that I have liked better than any other shape I've bought or was given since.

And thus in a twinkish and creamy-skinned but unmistakeably manly form, I started dressing like a complete and total slut. And it is in this guise that I changed my display name to "Robbie" (another fantasy, nobody has ever called me that in my life) and was actually able to flirt gently with people I encountered. And I find I like being this kind of person in my virtual reality: scantily-clad with a bit of a hard rock edge and apocalyptic, goth, and steampunk overtones. 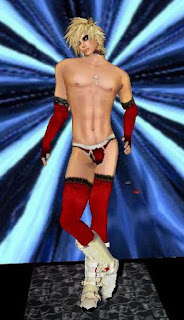 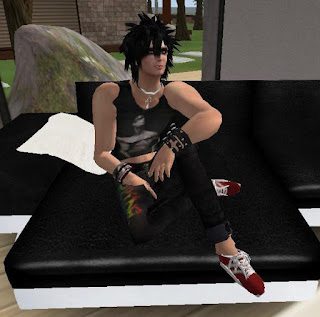 The Robbie avatar, as I said, has cured a lot of my shyness. I feel, when I'm wandering around SL in his guise, a lot more confident and attractive, and can strike up conversations with people I meet in various sims with greater ease... still not completely gregarious, but a lot more outgoing than I was in my goth or boy guises.

Although, interestingly, I feel more comfortable with the straights in my vampire clan than in any of the all-gay sims I've encountered. They've accepted me as-is, and several even seem to like me (or Robbie, or both) but they don't get so sexual with me that I become uncomfortable. Like this one time I was wandered around a gorgeous Ancient Roman sim that turned out to be part of gay "Gorean" fantasy realm, and was approached by a slave who knelt in front of me and put his hands behind his back, then "smiled beguilingly up" at me (according to the little "gesture" chat)... I got so flustered I just teleported out without even apologizing for my abrupt departure.

So anyway, that's what I've been up to lately: no writing, very little reading, just dancing my pixel ass off and spending Lindens all over the place. And so, if you don't hear from me again for a little while, you know where I'll be.

I can be found under the name RobertManners if you want to meet up with Robbie in your own virtual persona. But now I have to go get ready for the Red & White Pre-Valentine's Party at The Renegade Club, and I have to buy something schmexy to wear... something like this, perhaps? 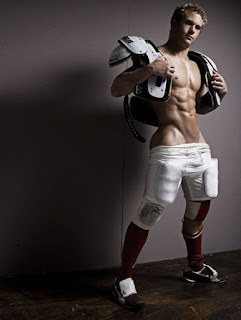 Posted by Robert Manners at 8:49 PM
Email ThisBlogThis!Share to TwitterShare to FacebookShare to Pinterest