It's interesting, trying to be aware of one's own moods and physical state. When I wake up in the morning, I actually have to ask myself "How are you? How are you feeling?" And it's a legitimate question, because I usually don't know right away and have to think about it.

And then, of course, it tends to change after I've been awake for a while. Some days I wake up and wonder if maybe this depressive cycle is really over, if maybe I'll have a few days or weeks of Normal; but then I start wanting to cry, or wanting to jump up and down, or wanting to slash my own throat just to make the feelings stop. And then I try to remember what Normal feels like, and I can't. I can never recall the feelings of Normal, or even of Depressed or Manic, I only have the feeling of Now.

But you know, we all have regrets. I don't think it's possible to get through life without them. The trick is to learn from them and accept them. That's the thing I haven't been able to do for most of my regrets, I haven't come to truly accept that there's no going back and fixing things, that some opportunities go by and never come back. I know this to be true, but I haven't accepted it, if you see the difference.

This is a central mystery of my character, a defect without cure because it is a defect without cause. I don't understand it, I don't comprehend where these feelings come from, and so I can't see how to cure or even ameliorate the feelings.

I sometimes think it's a curse, being rational. Why can't I just feel things, why do I have to think about them? And, conversely, why do I have to feel things that do not respond to rational deconstruction? I sometimes think it would be better to be all one or the other, either completely rational or completely emotional, and not have to struggle all the time to make the two sides fit together and operate peaceably. I always envied Data on Star Trek: TNG and felt that he was an idiot to wish for emotions.

But the feelings are coming fast and furious right now, and my rationale can't cope with them all, can't even find a foothold in some of them. I feel lonely right now, and horny, and I hate my body but I hate that I have to do something to change it... I want it to change by itself, right now, just stop being fat and start being trim. I hate that I'm so afraid of rejection that I can't even ask a guy I like for his phone number without having a nervous breakdown, so afraid of being hurt that I haven't had even a whisper of a glimmer of a possibility of a relationship in five years, haven't had sex in nine years, haven't made out with anybody in eleven years, haven't had a boyfriend since 1992.

My youth is gone, and I wasted it. My friend Jen put it so concisely the other night when we were talking about our shared past and what we would do differently if we could do it all over again: "If I knew then what I know now, I would have been a slut instead of a lush." Truer words were never spoken, in my humble opinion.

Now, I know perfectly well that I never had the ability to be a slut, that happy sexual promiscuity was never one of the Choices, that I could no more have had great sex with a cast of thousands than I could have pushed a Sherman tank up a flight of stairs while inventing a cold fission machine. But I want that life so badly, and it is even more not-available now that I'm thirty-seven and overweight than it was when I was twenty-seven and fairly cute (though I didn't think so at the time... I've always hated my body, since I was a small child).

Fortunately, I know that the intensity of this feeling is chemical rather than real... that my body is making me feel this way, not my heart. I can't tell you how much I'm looking forward to treating this condition medically. I do wish it would happen in a speedier fashion, but the fact that it is happening puts some heart into me. I'm just counting the days to group therapy (next Thursday, huzzah!); I'm trying to not build up any expectations about drug therapies, but I cherish the hope of being normalized by something, I fantasize about waking up Normal every day.

Still, today, this week, right now, I am miserable; and seeing things like this picture makes me want to tear my heart out of my chest and scream to the heavens because I will never be this. It makes no sense, but there it is. 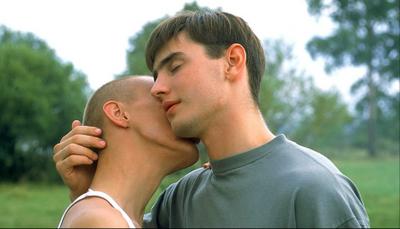 Posted by Robert Manners at 10:08 AM
Email ThisBlogThis!Share to TwitterShare to FacebookShare to Pinterest