Wake Me When It's Over

I am so not prepared for tomorrow. In fact, I have to report that I am fucking exhausted, working my ass off all week, and there is still a pile of chores to do before everyone shows up here at four tomorrow... cleaning, decorating, wrapping, cooking, cleaning up after the cooking, table-setting, cooking some more, and cleaning up after the cooking again.

Here is a perfect visual representation of exactly how I feel about Christmas right now: 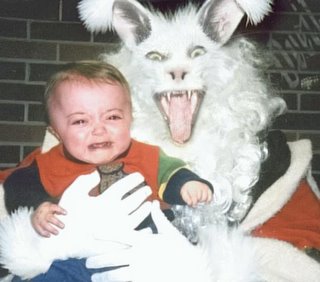 You'd think that after having a week and a half without work, I would be all rested up and ready to rumble... but no. In fact, my ten days off were more exhausting than you can imagine. Over last week, I did get a lot of sleep, but we were preparing for both Christmas and our weekend trip up to Placerville for Grandmother's niece's 50th wedding anniversary (I'll give you a second to work that out on a piece of scratch paper).

This trip has been the centerpiece of Grandmother's brain for months, she's been planning around and looking forward to it since we first heard about it in July, and so it ended up being rather labor-intensive... we had to shop for it, you see. Not only did Grandmother want something to wear to the party, but she wanted Daddy to wear something nice too, and so we had to buy him something nice. It was a lot of effort on my part to talk her out of buying him a suit that he would only wear once; after much effort, I finally got her settled on a dark sweater with a shirt and tie.

Then came the trip itself, and it was so tiring I'm still tired from it. The drive wasn't too bad, except that it rained a good deal; but once we arrived, Grandmother was so excited to be around her family again that I had a hell of a time trying to keep up with her... and by "keeping up" I mean that I had to schlepp her around at a much higher rate of speed, and moving in various different directions, changing plans at a moment's notice, and somehow more irritating than I thought possible (and regular readers know exactly how irritating it is possible for Grandmother to be).

And then we were running around all over Placerville, first up and down ill-lit country lanes in dense fog to cousin Kevin's house, where we were meeting for pie and coffee; then the next day in pouring rain even further out in the countryside to cousin Dub's house for fudge and cider, a hayride in a horse-drawn wagon, caroling, and general visiting (we didn't go on the hayride, though). Then in absolutely pissing rain to the Lion's Club in Placerville for the party itself, which was nice but went on and on and on and on and...

In between all these gatherings, I was running around with unexpected errands. For example, when my nephew and niece showed up at Dub's house with nothing to wear to the anniversary party but the jeans and sweatshirts they had on (my sister neglected to tell Matthew what the party was for), I was dispatched to TJ Maxx to buy them shirts and sweaters to dress them up a little. It wasn't difficult, in fact I found it distinctly entertaining (Matthew is on leave from the Army before being deployed to a two-year tour in Korea; I haven't seen him since last Christmas, and I wanted to spend time with him while I have the chance), it was still tiring. Anyway, though I had a good time, it was a lot of hassle, and very little sleep in between (I never sleep well in hotels).

Then when we got home, I was so tired I spent most of Monday in bed, then had to start the Christmas tree, and then finish Grandmother's Christmas shopping; and then on Wednesday I started a new temp assignment. This one is going to last for two months, covering for a returning worker who is out on disability; I'll be doing various Accounts-Payable, Purchasing, and Payroll tasks (of which I only have the faintest understanding after three days) at the administrative field office of a vast national elevator company. It's a pleasant-enough place, a big room full of cubicles, lots of people around, free coffee and sodas in the breakroom, and a really first-rate bathroom. But I have to be there at 7:30 in the morning, which is a struggle; and I've discovered that not only am I expected to dress nice every day (upper-end business casual), but we aren't allowed to wear jeans except on Friday... when we are actively encouraged to wear jeans. One of those places.

I am aware that a lot of people were out on vacation, and a lot of clients closed down, when I started this week, giving me a quiet spell for training; but they'll all be back, and the company operating in full swing, after the New Year... until then, I don't even know what the work or the environment is really going to be like. Still, it seems nice enough so far... and they gave us a paid half-day off Friday as a Christmas bonus, so I'm inclined to like them.

With my bonus free time, I took Daddy out to the mall for some Christmas shopping; this is the first time he's bought gifts since my stepmother passed away several years ago, and since he finally sold his house out in Concord, he had some spare cash with which to splurge. It was fun shopping with him, but the lines at the stores were outrageous.

I mean, it's two days before Christmas, the malls were thronged, and all of these huge department store chains had only minimal sales staff working these gigantic crowds... hardly more than they would have working on a Wednesday afternoon. I stood in line at Kohl's for over forty-five minutes, because they had only two out of six cash-registers open on each end of the store... thousands of customers, four cashiers. It was the same story in several other department and specialty stores we visited, where there were lines halfway through the store and only one or two cashiers working thousands of dollars worth of sales. I hope their stockholders choke on the profits.

Now that's done, and I need to finish decorating today. Grandmother has been trying to decorate the tree that I only managed to get set up and strung with lights on Monday; which means that all the ornaments are in the front center of the tree, and stop about four feet up. So I have to finish that, sprinkle the other holiday bibelots around the shelves, mantel, and tabletops, gather everything back up into the attic, and dust and vacuum. That should take a few hours, though Caroline is coming over today to give me a hand (thank God, I don't think I could do it alone).

But whether I care or not, these tasks have to be done. It's my annual gift to my family, working like a carthorse so that their holiday traditions shine brightly and run smoothly. It's kind of nice knowing that I don't have to be in the mood to perform all these festive preparations... I just do them because it's what I do.

But I'm not doing them, sitting here writing, am I? I guess I'd better get moving. Thanks for visiting, and have a super weekend, whatever you're doing with it. I wish you love, and great accessories! 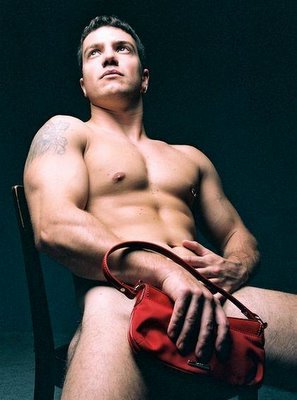 Posted by Robert Manners at 10:39 AM
Email ThisBlogThis!Share to TwitterShare to FacebookShare to Pinterest