As I reported some weeks back, I have restarted Worst Luck in the second draft. I came to feel that the old beginning started off too intimate and too visceral in Danny Vandervere's reality; I came up with a conceit regarding luck and good fortune that gave it a more chatty and intellectual introduction to the various important elements of Danny's life and character, but as I developed it, it became fulsome and hyperbolic... I was starting to dislike Danny, the way he was unfolding. So I scrapped that and started afresh with an opening sentence that I was, for some idiotic reason, saving for another Danny story that I'm developing in the back of my head.

Anyway, I got started on this new beginning on Sunday, it came to me full-blown in the middle of church (where I usually pass the time journaling my fiction, either making notes or writing out scenes and vignettes) that there was no reason to save that first sentence for later, it would work just lovely here. And that gave me the kick in the rear I needed to get moving, first jotting a draft during the sermon and then typing in Blogger over the last three days.

But, in my usual manner, after getting what I wanted to say written down, I found myself unable to move forward. And whenever I get stuck in my forward momentum, I start tweaking the material I have until it becomes overworked and unweildy. So to prevent that, I hit the "Post" button and made myself walk away from it.

So while I am forcing myself to ponder the next sentence, be a lamb and read the following paragraphs; then let me know if these paragraphs would induce you to read further, or if they'd inspire you to throw a book across the room.

The first thing, perhaps the only thing one needs to know about Danny Vandervere is that he is beautiful. Not even merely gorgeous, not just cute or pretty or handsome or sexy or attractive, though he is certainly all of those things — but amazingly and deeply beautiful.

It starts with his looks: his face is exquisite, a pretty oval just squared enough to be handsome as well, with high delicate cheekbones and a strong sculpted jaw, framed by a cherubic halo of loose black curls with glints of blue and gold; his nose, where even the best faces go a little wrong, is quintessential — perfectly straight, perfectly centered, exactly the right length and width for his face, with an aristocratic bridge, a slightly upturned tip, and delicate nostrils; his eyes are large and almond-shaped with the suggestion of a faunish slant, his irises the soft warm gray of woodsmoke with wisps of lavender and sparks of gold, fringed in black lashes as thick and long as sable fur, and topped by dense and sharply arched black brows; his mouth is large and luscious, the rich red of ripe cherries, an architecturally scrolled upper lip and plump pillowy lower lip, the corners quirked with little dimples, covering toothpaste-commercial teeth; his complexion is milk-white, as clear and smooth as a baby's, with spanked strawberry cheeks, never touched by acne or sunburn, and still virtually beardless at the age of twenty-two.

This stunning face stands atop a tall body of classical proportions, slender but opulently muscled, broad-shouldered and narrow-hipped; his pectorals and deltoids are plumply rounded, almost spherical, as are his thighs and buttocks, his back is deep and smooth, his laterals acutely tapered; but his belly and loins are lean and tight, a tiny waist etched with a wonderfully delineated pelvic girdle and traceries of colorless veins; his skin is thick and velvety smooth, completely without mark or blemish, and graced by only the merest feathering of silky black hair at the armpits and pubis; his hands and feet are large and elegantly attenuated, with clear glossy nails and pampered cuticles; his only proportional imperfection is found in his genitals, which are much too big, though not ungainly and quite beautiful in their own right as far as shape and color.

His muscles are agile and endowed with their own sense-memory, able to repeat any action perfectly, trained to dance a waltz or throw a punch with equal ease, as well as to ride a horse, hit a tennis-ball, parry a sword, run a marathon, and toss a football. His every movement, from the most instinctive to the most rehearsed, is as graceful as ballet, a true poetry of motion.

Danny's beauty is not just skin-deep, either: he has a beautiful mind, a remarkably retentive memory and a genius IQ disciplined and developed with the best liberal-arts education money can buy, conversant in music, art, languages, literature, science, history, and all the social graces; and he has a beautiful spirit, sweet-natured, gentle, generous, honorable, and unfailingly gracious. Even his voice is beautiful, a sonorous baritone with a supple feline growl under the surface, able to sing light opera and showtunes, to declaim Shakespeare and murmur the sweetest of nothings.

And since Fortune heaps her blessings on Danny Vandervere with a ladle rather than a teaspoon, all that beauty was born into wealth and privilege, where it could be properly nourished and cultivated, rather than taking its chances in a Midwestern trailer park or an Eastern bloc backwater. Danny's family is very rich with very old money; the third-largest landowners in California, the Vanderveres received a grant of just over one million acres of tree-covered mountains in the northern Coastal range when the state entered the Union in 1850; they are the largest paper producers in the state, and Vandervere Mills supplies the tissues, towels, and seat-covers to over eighty percent of the public restrooms in the western United States.

The paper-mill profits are added annually to a family trust of venerable age and staggering size, which pays Danny and his numerous relatives very comfortable allowances; he also inherited several millions from his Great Aunt Mathilda shortly after graduating from Stanford, which allowed him to buy property in the form of two apartment buildings on a quiet side-street in San Francisco's Castro district, one of which houses his own spacious flat.

Of course, in an ideal placement, Fortune would have given Danny into a family that was warm and loving; instead, she gave him a family that was not only cold and distant but which actively disliked the too-beautiful and too-gentle child in their midst, so different from the rest of the handsome, arrogant clan — but at least they could afford to hire servants to love him, so though he felt the lack of familial affection, he also knew he was indeed loved and could have had it a lot worse, and so never complained.

And this underlines the beauty of Danny's nature: he knows exactly how blessed he is, and is profoundly grateful for his blessings. He enjoys his own beauty the way one can usually only enjoy another's, and he enjoys his money and privileges as if he hadn't always had them; but he never once thought his beauty or wealth made him better than others, never felt entitled to anything because of them — they were just the blind facts of his existence, a parcel of extraordinary luck that had nothing to do with his worth as a human being.
___________________________________

Thoughts? Where to go next, what to change first, suggestions, complaints? Use the comment feature below, s'il vous plait! 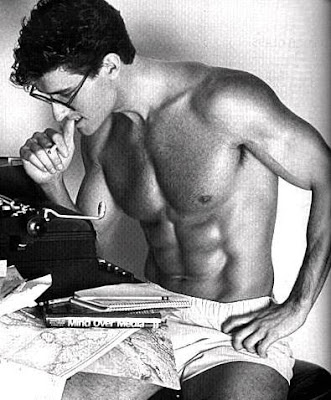 Posted by Robert Manners at 7:32 PM
Email ThisBlogThis!Share to TwitterShare to FacebookShare to Pinterest