Well, it's been quite an interesting week. I continue to spend a lot of time in the Career Center at work, though not all my time (thank the gods); and with a little bit of an attitude of acceptance, I have gotten to the point where it doesn't bother me quite so much. I mean, it's still draining and unpleasant, but I managed to let go of my resentment at being down there, and that makes it less draining and unpleasant... and therefore pretty much doable.

Friday was Caroline's birthday, and we had a great outing to San Francisco, shopping and people-watching on Pier 39 and then dinner at Forbes Island... I spent way too much money, but a fantastic time was had by us both. Wanna see some pix?

Here's Caroline having her caricature made... and being Caroline, she was posing like it was a Vogue cover shot. I thought the caricature came out really cute, he captured her expression really well: 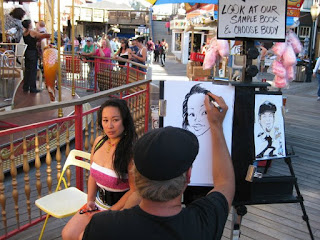 This is the lighthouse on Forbes Island, which is a sort of houseboat/barge built into a floating island that is moored near the breakwater in the Sea Lion Harbor marina between Pier 39 and Fisherman's Wharf: 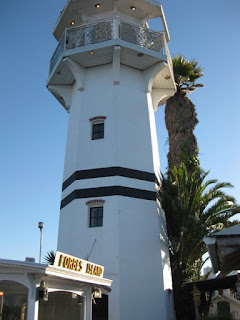 This is the spiral staircase inside the lighthouse, which was hand-built by the island's owner and creator, Forbes Kiddoo: 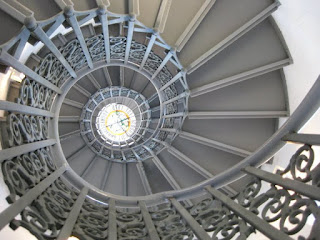 Here's Caroline at the entrance to the restaurant, which is underneath the island, or inside the island, whichever way you want to look at it: 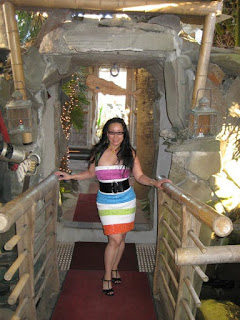 And here am I looking very scruffy and sweaty in the (very warm but quite beautiful) dining room of the Island, with my appetizer seafood chowder and a nice glass of ginger ale with fresh mint (a taste sensation that Caroline discovered in a Brazilian restaurant some years back): 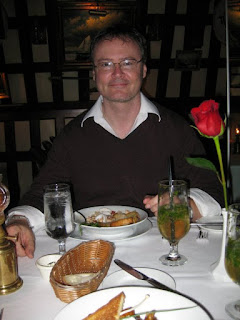 And here's Caroline again with her entree of triple-wine-glazed lamb and potatoes au gratin: 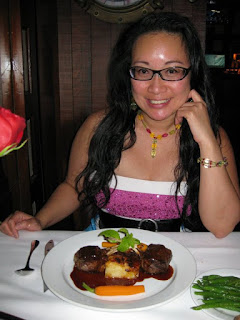 While I was on Pier 39, I bought some "art" at two of the shops we visited... and I use quotes here because they are mass-produced resin figurines (hand painted, though) for which I spent too much money ($35 and $70, respectively) but am completely in love with. 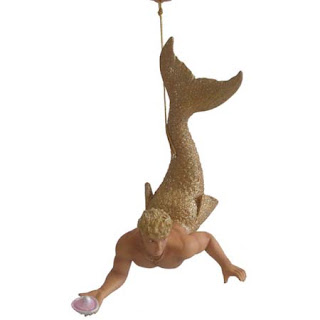 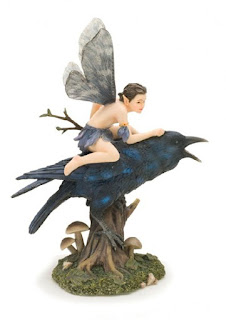 Then on Saturday (as if that weren't enough for one weekend), I got together with Angelique and Damon for the San Francisco Grand Ducal Coronation 2010. The two of them got a motel room because they were staying over for Folsom Fair, and generously allowed me to use the space to get ready.

Everything went wrong... it was roasting hot, and though the room was air-condtioned, I was still sweating like a whore in church. My new makeup (from Kryolan) just wouldn't stay put... it went on fine, and then I got the setting powder onto it, and then I'd sweat some more, and the base would separate into little wet clumps. So I had to reapply several times, and it still flaked off.

Then I went to get dressed, and discovered that I had neglected to pack my bra... which wouldn't have been a disaster except that the dress I was wearing was too big for me and strapless, which is why I wanted to wear a bra with straps so I could attach the dress to it. I tried on some of the dresses I'd brought for Angelique, but they either didn't fit or didn't go with the black shoes I had on.

Eventually, though, I rigged the thing up with the hanging-straps from inside the dress, which I cut off and attached with safety pins. Then I pinned the dress to my jacket for extra security... and even without a bra or a corset, it looked really good! And it was comfortable!

So the evening, once we arrived at the Coronation, was a lot of fun... there were many friends to say "Hi" to, and many cute boys to ogle; and then to cap the whole thing off, my friend Cookie Dough won the title of Royal Grand Duchess of San Francisco! It was a wonderful night.

So come Sunday, I was pretty well wiped. I still managed to go to church with Grandmother, and to lunch, and then a little bit of shopping before heading home for nap-time. And a lovely nap it was! Then I watched Time Bandits and played with my new obsession-game, Kingdoms of Camelot on FaceBook (where I just today reached level 22 and the rank of Earl).

Unfortunately, we got word that my aunt Terry had a health crisis Sunday afternoon and had been taken to the Emergency Room. She's been battling cancer for the last two years, so her crises tend to be pretty dramatic... vomiting blood and like that. I helped Grandmother pack an overnight bag, and she and Junior went down to be with her and with my cousin Jamie. She was awfully worried, and I'm awfully worried... but I'm praying and hoping for the best... or rather, I'm praying and hoping that For The Best happens to align with our desires (Terry's recovery).

So that's been my life in a nutshell.

My mood continues good, I am definitely loving this particular cocktail. My sleep has been a little off, but I attribute that to the new bed... after all, a brand new bed is very much like a strange bed, and I never sleep well in strange beds. After fifteen years of my old bed, this new one is going to take a little getting used to. Anyway, it's getting better, so I am not going to blame the sleeplessness on the new meds.

I had this great idea that I would capitalize on the inordinate amount of exercise I got last weekend working on my room by hitting the gym as soon as my limbs stopped being sore. But as with all my really great ideas, I forgot all about it by the time my limbs stopped being sore (which was Wednesday). I'm still holding steady at 225-228 and perfectly fine with that.

And that's all I've got to say today. Tune in tomorrow for a Picture Post! But in the meantime: 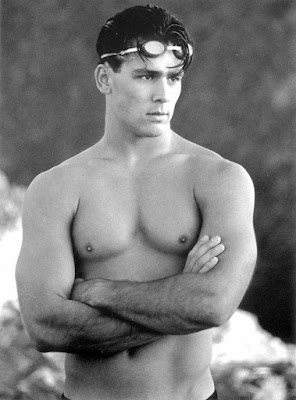 Posted by Robert Manners at 9:55 AM
Email ThisBlogThis!Share to TwitterShare to FacebookShare to Pinterest