As promised, here are pictures of me in my Lord of the Rings costume at the California Academy of Science... though after some reflection I decided that I was a Wizard rather than an Elf Lord, simply because the theme of the costume party was "Supernatural" and a wizard seems a little more supernatural in concept than an elf.

And so I made up a name that sounded LotR-ish (Godolphin is actually an old English family name, most notable for the extinct earldom created by Charles II for one of his cronies, but which only lasted two generations) and ran with it. Godolphin the Blue was a semifinalist, but not a finalist, in the Costume Contest... Caroline was also a semifinalist, though she had to practically mug the contest judge to get a semifinalist badge. As usual, whenever there's a straight woman involved, I am catnip and Caroline is anathema.

Here I am standing in the tunnel underneath the Rain Forest pond, which is a very cool display but didn't come out in the picture: 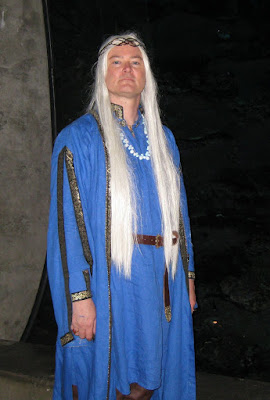 In the contest itself, taking a regal bow: 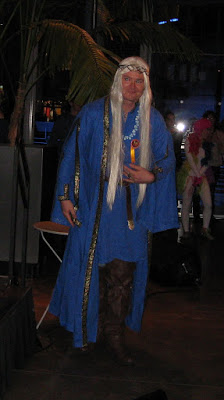 And riding a bronze Galapagos tortoise with Caroline (who was dressed as a fairy): 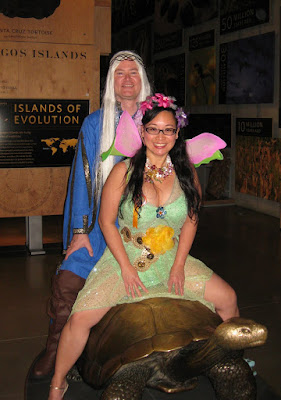 When I wore the costume to work yesterday, I left the wig off and just said I was a Prince of Gondor, which fit the look. I was the only one in a costume that day, as we hadn't planned a party and so nobody had felt encouraged to dress up... but that wasn't going to stop me! I paid too much for that outfit to miss any opportunity to wear it. Though I have to say, it isn't a very good garment in regard to temperature: when the room is warm, it doesn't breathe well, so I get all sweaty; and when it's cold, it doesn't keep me warm; and so on Friday when the temperature was going up and down all day, I got sweaty and then got cold, and it was very tiring.

Now tonight we are going to Slide, and this time I am going to be an elf lord, since I can carry my sword and have discovered which exact elven character I am going to be: Thranduil, King of Mirkwood, who is Legolas's father. A comfortably obscure character for whom nobody will have preconceived notions regarding his appearance... though in the cartoon version of The Hobbit, Thranduil is portrayed as being made of leaves and looks like a peevish cabbage.

Anyway, when more pictures are available, I'll be back to show them to you. In the meantime, have a spooktacular day! 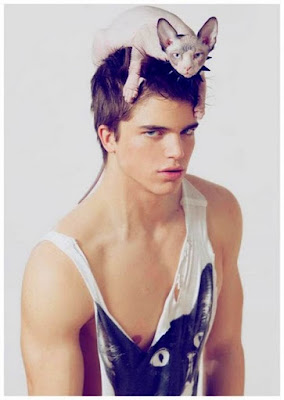 Posted by Robert Manners at 2:45 PM
Email ThisBlogThis!Share to TwitterShare to FacebookShare to Pinterest