These last two weeks have been rather hellish. I've been down with this cold that just lingers and lingers and lingers... if I lose too much sleep, I display actual cold symptoms, but most of the time it's just fatigue and a numbed brain... and I've had it for over two weeks now. I know exactly when I caught it and from whom, Tuesday before last from a coworker whose desk I used after she'd been coughing all over it; and it has been making the rounds at the office, felling four at least besides myself.

One of the worst symptoms of this cold is a pervasive irritability that makes everyday annoyances feel like epic betrayals of human decency. Talking to Grandmother has been almost impossible, especially when she makes me repeat myself, or when she explains to me how to do something that I already know quite well how to do. And then at work, it's a strain on the temper all day long, being nice to people whom I would prefer to strangle with a barbed-wire garrote.

But it seems to be abating... I took another sick day yesterday (the third in the last two weeks, none consecutive) and spent the day in bed with the HBO series Rome. Nothing like some violence and sex and costume drama to soothe the savage breast. And over the weekend, I watched the entire Jeeves & Wooster series, which always makes me feel better... though I tend to spend the next few days thinking with an English accent and dropping words like quite and rather into my speech more frequently.

So now I'm trying to be well so I can go to my two Halloween parties without falling ill again. Tomorrow evening, Caroline and I are going to the California Academy of Science Nightlife Halloween party, to which I am looking forward with some enthusiasm, since I have been wanting to see the new Academy since it opened last year; and then on Saturday we're going to Slide, a rather nice little (straight) dance club near Union Square... we went there last year and had a lovely time, and are hoping to repeat the fun.

I'm a little irritated with my costume: an Elf Lord, though not any particular Lord of the Rings character... sort of a blend of Elrond of Rivendell (who I have recently discovered was half-human) and Celeborn of Lothlorien. So not only do I have to explain every time I tell someone about my costume that I am going to be a Lord of the Rings type of elf rather than a Christmas elf (as if), but then I have to fend off actual LotR fans with an explanation that I'm not going as any particular elf lord, but rather a composite character for whom I have not made up a name.

And then the elements of the costume have been disappointing and/or more difficult than expected. I bought an outfit along with a belt and sword frog from this medieval costumer in Ukraine, ordered it in May, and then didn't receive the outfit and frog until July, and the belt finally came on Monday... with dozens of emails between myself and the one (marginally) English-speaking Ukrainian at the costumers over the intervening five months. Here's essentially what it looks like, though I got it in summer-sky blue rather than red: 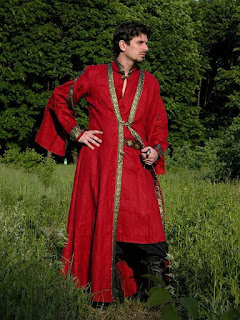 Then I decided to wash the tunic of the outfit, which was intensely scratchy (made of authentically medieval flax linen, and I think starched at that), and in the wash (cold water, gentle cycle, Woolite detergent) not only did it shrink a little, but one of the seams unraveled a few inches near the hem and the cuff buttons all broke apart. So I had to spend a good deal of time steam-ironing the fabric to stretch it to its original dimensions, and will have to do some stitching on the seam and either replace the buttons or rig up something with safety-pins to keep the cuffs closed.

Then I started working on the wig, which is very long (about fifty inches from the crown) and silvery white, and it proved more difficult than I had thought it would. I intended to do a braid at each temple drawn to the back, and then a stream of hair laying over the front of each shoulder and the rest hanging down in back. However, having never had hair (real or wig) of that length before, I did not realize that it would tangle inextricably down toward the bottom... so separating out hanks is impossible without actually ripping or cutting the tangles, which doesn't look very nice.

Then there's the sword, which really makes the outfit, but I can't bring it to the Academy and may not be able to wear it to work. But at least I don't have to worry about boots: I have three different pair to choose from... two pair are costume boots, with nice crepe soles but slightly cheap-looking, and one pair is regular women's dress boots in a quality BoHo style and thin leather soles. Much will depend on how far I'm going to have to walk.

Well, anyway, I am going to stop by the Halloween City store near my job during lunch today and see if I can get a more cooperative wig, perhaps one that is already styled in the elven manner (and brown, so that I can say, definitely, "Elrond, Lord of Rivendell") and maybe some ear-tips to sell the elf identity better. The whole purpose of the long wig was to cover my ears so I wouldn't have to do that, but the various failures and vagaries that I have experienced since trying to get down to brass tacks with this costume have made me uncomfortable with my concept.

I will of course post pictures as soon as I have them.

This cold has sent my moods all flooey... I always get depressed when I'm sick, as one might expect; but I also tend to forget to take my meds when I'm sick, the morning doses in particular, as laying in bed all day throws me off my natural rhythms. And since my morning meds are the Wellbutrin that is more of a pick-me-up than a hold-me-down, I slip into depression that much more easily. But I expect to recover the balance my meds have been giving me, once the cold symptoms dissipate.

I still weigh the same, between 225 and 227 every time I get on the scale; but I do it less often than I used to, I've rather lost interest in my weight these last couple of months. And I'm not eating very differently from usual, no binging or starving, so I'm going to call this my base weight for the time being. Maybe I'll get more in a fitnessy mood in the coming months... you never can tell with me.

And that's all I have to say today. Have a lovely week! 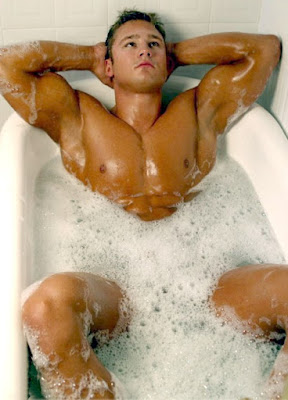 Posted by Robert Manners at 7:52 AM
Email ThisBlogThis!Share to TwitterShare to FacebookShare to Pinterest