Well, it's been rather more than a week since my last check-in, but I've been kind of busy the last few days... completely obsessed by another waste-of-time FaceBook game. This time it's "Kingdoms of Camelot," which I started playing last Wednesday and have already risen to level 38 of 60, with the title of Archduke. The game goes a little slower once you get into the upper reaches, as it takes longer to upgrade buildings and resources with each successive level... for example, to build a Level 1 Cottage takes thirty seconds, while a Level 10 Cottage (the maximum level) takes an hour and a quarter; more important buildings take even longer, right now I'm upgrading to a Level 8 Alchemy Lab which requires 17 hours, and the Level 7 Wall I did before that was 32 hours!

So I was up to Level 4 on everything in my first city when I discovered another facet of the game, Alliances. There is a chat window in which you can visit with other game-players in your alliance and exchange tips and tricks, as well as contribute (by clicking) to their construction projects. I first joined a very small and inactive alliance just for its name (Rainbow Alliance) merely to join one, since that was one of my early Quests (tasks recommended by the game which are rewarded with resources), but there were only two people in it and neither of them played much... I already outranked them both by quite a margin when I quit the alliance to join a much larger and more active one called Pandemonium... again I liked the name, and it had fifty members already and appeared to be very interactive.

This was over the weekend, so I had plenty of time to devote to the game; and the larger Alliance was a lot of fun, it added a lot to the game... it linked me to a Wiki page about the game that helped immeasurably to figure out what I was supposed to be doing, and there is a separate website created by the Alliance's Chancellor in which we can share other game information. I now have two cities and have conquered six wildernesses (which increase your resources) and have huge armies scattered all over the map. I've also added about fifteen friends from the game and not only do I get lots of free resources that way, but I get to browse profiles belonging to people I would never meet socially.

So anyway, that has been occupying my free time for the last week... I expect I will start getting bored with it now, since the construction projects are all taking so long; there's no point in checking in more frequently than twice a day to start a new build and chat a bit with the Alliance. At the moment, I do check in frequently to assist with others' projects and monitor my cities' activities and make sure nobody is attacking me, but I foresee a waning interest. It is always thus.

My mood is good... but I decided to scale back on the Seroquel, as the sleepiness returned and started becoming problematic. So on Saturday I went down to 50mg instead of 75, and felt immediately better, have felt much better all week. But I'm noticing my mood is fluctuating more now... as always impossible to tell if it's the meds or just circumstances, but I may have to choose between being sleepy and being crazy. We shall see.

Nothing changing there. I'm the same weight and fitness level as always. I've been thinking about the gym more, but being so sleepy by the end of the day makes it impossible. We shall see, there, too.

And in closing, let me say this... 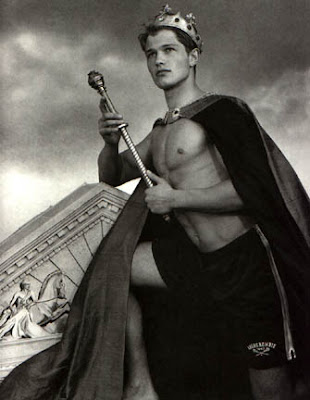 Posted by Robert Manners at 4:01 PM
Email ThisBlogThis!Share to TwitterShare to FacebookShare to Pinterest