I didn't see the boy leave that evening, he must've sneaked out while I was unavoidably forced to the bathroom, or quite avoidably detained foraging for snacks. And I didn't see him come back the next day, either, or the day after — despite staking out my front window from first light to sunset.

More interesting, though, nobody else came to the house: if the new owners were coming in, I would expect more workmen, as nobody ever moved into a new house without repainting or reflooring at least part of it; nobody came to take away the realtor's rented furniture, either, nor to clear away any of the staging; and most irritatingly, the decorator I'd imagined was The Boy's employer never made an appearance, crushing my fantasy of stalking a lovely young assistant through professional channels.

The lack of the mysterious decorator made me wonder if the boy was indeed a decorator's assistant as I'd surmised.  What if he was part of the moving team, flying out early to get the house ready for moving in while the other two drove the truck across the country? Or if he was an employee of the new owners, a personal assistant or secretary? Or what if he was one of the new owners? Or a member of the family?  What if he was moving in next door? I didn't think my heart would be able to stand having that boy next door permanently, I'd just die of the strain.

The new owner turned up on the Friday, and was as unexpected as everything else that had happened in front of that house. A pearl gray 50s-vintage Rolls-Royce ghosted up to the curb outside, disgorging The Boy (gorgeous in a dapper summer suit) and a uniformed driver the moment it came to a halt; then The Boy reached back into the car and handed out a woman of absolutely stunning chic: all long slim limbs and dramatic angles, with a broad semi-sheer black leghorn hat smartly tilted, a sharply tailored Chanel cape of tweedy bouclé, elegant gloved-to-the-elbow hands emerging from slits at the front, stiletto black boots up over the knee, and an unmistakable Hermès Kelly handbag of ink-green alligator hanging from her elbow.

Her face was even more arresting than her intensely stylish ensemble: a long aristocratic nose, high arched brows, bold cheekbones, great fathomless black eyes, incisively angled jaw, precise mulberry-glazed mouth, and flawless white skin so smooth it seemed to glow with reflected light. She was as artificial and magnificent as a Dior New Look model, or a black-and-white film star, graceful and majestic and too exquisite to be quite real.

More interesting, though, is that she had the same features as The Boy, the same eyes and nose and cheekbones arranged slightly differently, more refined and brittle, but undeniably of the same blood.  Could she be his mother?  She didn't look old enough, but too old to be his sister. Maybe an aunt?

She gazed appraisingly at the house next door, studying it without apparent satisfaction, while the driver unloaded a good deal of expensive matched luggage from the back of the Rolls.  The Boy stood just behind her and to one side, nervously biting his lip and watching The Diva (what else could I call her?) as she examined the facade, obviously hoping for approval and fearing reproach. 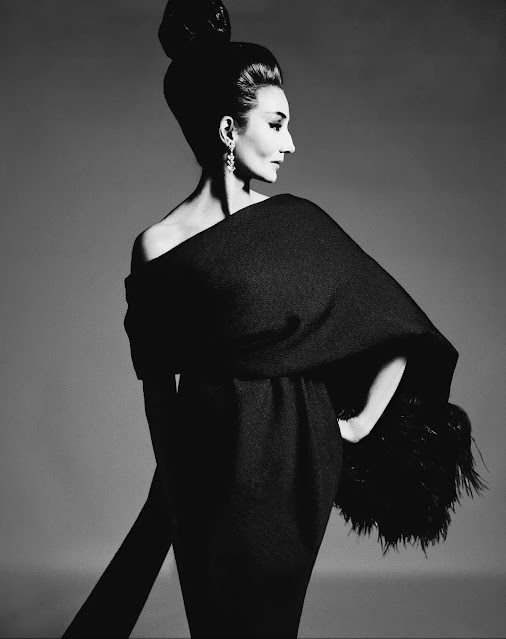 Posted by Robert Manners at 9:17 AM
Email ThisBlogThis!Share to TwitterShare to FacebookShare to Pinterest