The first time I saw The Boy, stepping out of a Lyft car right outside my window, I literally choked on my coffee.  He was that beautiful, startlingly beautiful: you just don't expect such beauty to appear in real life — in a photograph or movie, perhaps, but even there it would surprise and delight — and the shock of it makes you gasp, inadvisable with a mouthful of coffee.  By the time I stopped coughing up a lung, he was gone.

He reappeared a few hours later, coming out of the vacant house next door and stepping into another Lyft car, and I greedily memorized him: the flash of huge soulful eyes, puppy-dog brown with exceptionally clear whites, framed in shaggy dark lashes; then the noble bone-structure of the face, delicately squared jaw and exquisite cheekbones, a Roman nose just big enough to add patrician elegance, perfectly centered in impossible symmetry; a sumptuous rose-petal mouth arranged in a gentle smile;  a remarkably lucid complexion, ivory tinted with gold and rose, a childish blush to the smooth cheeks; all framed in a soft mop of loose chestnut curls, long enough to brush his graceful long neck; beautifully balanced shoulders, neither broad nor narrow, just precisely the correct width with curvaceous shoulder caps; a long loose-limbed body, willowy rather than skinny, tall but not dramatically so, a stately posture that was about halfway between a dancer's proud strut and a skater's feline slouch, dressed in narrow jeans and an oversized sweater that somehow clung to his supple frame.  I didn't notice his hands, which are a particular fetish of mine, but I did take particular note of his ass, which was unexpectedly pert and round for such a lanky body type.

Pix or it didn't happen, my friends declared when I rhapsodized about this sighting of extraordinary beauty on the message-board that made up the bulk of my social life. Also a number of suggestions for what I should do when I saw him again, ludicrous scenarios where I could approach him and engage in flirtation with some seemingly innocent ruse—which I had to protest I would never do.  I'm much too old for that sort of thing, and too fat, and too ugly.  No beautiful boy wants to be approached by a flirtatious toad, and I couldn't bear to inflict myself on one.

Nevertheless, I set up my camera in the window-sill so I could quickly touch the buttons to turn it on and snap a photo in case he ever turned up again. I felt like a terrible creeper, plotting to photograph the boy from under cover like wildlife in the woods; but I wanted proof, for myself more than my message-board friends, that such beauty really exists, that I didn't hallucinate him or exaggerate his appearance in a fit of romantic yearning.

I didn't really expect him to show up again, though.  People had been in and out of that house almost daily for nearly a year: an ever-changing cast of realtors, each one different in age, gender, ethnicity, or class but identical in their unnatural good cheer and leather-bound portfolios held like a shield against their chests, chattering loudly to dubious young WASPs and tech-boom hipsters while struggling with the electronic lockbox; there were decorators, too, and delivery men, as the realtor representing the sale was constantly replacing the staged furniture in hopes that a different reclaimed industrial dining table or sack-cushioned sectional would get the property moving.

I'd been following the sale in its online listing, and thought it might never sell, despite the housing crunch: they were asking too much, for one thing, a good half-million above what anyone would pay for this neighborhood—gentrification may have reached all the way into the deepest slums, but you still can't put a Pacific Heights price-tag on a Noe Valley side-street; for another, it was unforgivably ugly, a gloomy Italianate gutted for a modern faux-industrial interior, badly designed for the most awkward possible floor plan, with all its rooms opening onto a heat-sucking three-story atrium overlooking nothing more inspiring than a sunless back yard. It would've been great up on a hill, or a southern beach, but pointless and expensive in a damp hollow.

I had been lucky with my house, a tall and extremely narrow Victorian with original floors, turn-of-the-century molding, 1920s bathrooms and a 1950s kitchen, bought with cash for less than what I'd got for my grandmother's big old Piedmont house, during a brief dip between real estate bubbles; and it gave me a gloating sort of satisfaction to peruse real estate ads as the prices kept climbing to ever-more-astronomical heights, spending so much time monitoring the housing market that it pretty much counted as an official hobby.

The best part of my house, better than the bargain-basement price, even better than the gay-Mecca-adjacent location, was the deep bay window in the front parlor, a few feet above street level and so close to the sidewalk that I could almost reach out and smack passersby in the head.  It made for an excellent people-watching post, and I spend most of my day there, as nosy and observant as any Mrs. Kravitz, ostensibly working (though more often playing) at my computer with the big-screen monitor angled so that I could take in the whole street with the merest glance to the right. I memorized the comings and goings of my neighbors, making up names for them and trying to suss out their relationships and activities, and delighted in flashes of beauty and the overheard conversations of visitors walking up toward the Castro from whatever parking-space they'd managed to find in the residential streets.

That was not how I'd intended to spend my days when I bought the house, else I would have bought a much smaller place on a busier street. No, I had intended to live graciously and entertain frequently, to give smart dinner-parties to a slough of new friends, one of whom would fall in love with me and be my boyfriend, move in with me and maybe even marry me. I'd thought I would spend my time reading in the wing-chair or writing at the head of the Queen Anne table in the combination dining-room/library; lounging with crossword puzzles and lemonade in the tiny garden dominated by a spreading oak tree; futzing about with recipes and jams in the roomy kitchen; sharing intimate moments with a special someone in the big master bedroom upstairs.

I'd intended, in short, to break out of the lonely semicloseted shell of my life with my late grandmother, with whom I'd lived since I was orphaned at age twelve until her death seven years ago.

Grandmother was an extremely kind, gentle, and generous woman, but unfortunately strictly religious and of a generation too mired in tradition, and she could not wrap her mind around open homosexuality.  She accepted it, she knew I was gay, knew that it was something I could not change, and she loved me no less for it; but she could not countenance talking about it or seeing evidence of it.  To be fair, she wouldn't have been able to talk about or see evidence of heterosexuality, either, outside of the sanctity of marriage. Her religious scruples were consistent and sincere, and the only alternative to traditional marriage for anyone, straight or gay, was celibacy.

And since I loved my Grandmother extravagantly, as I believe she loved me extravagantly, I accepted celibacy as a way of life to please her.  Well, not just to please her: complete honesty bids me admit that I received no offers in all those years to relieve me of my celibate state.  Aside from being cripplingly shy and unable to so much as flirt with a man unless I was falling-down drunk, I had an uncanny knack for only being attracted to men who could not be attracted to me.  And rather than address my own neuroses, or admit to myself that I'm just not physically or personally attractive, I laid the whole issue at the foot of Grandmother's religion and absolved myself of blame.

But then she died, and I was all alone for the first time in my forty-five years of existence; I was still young enough to build a new life; and I was awash with money, Grandmother's tidy competence and the the sale of her house added to the modest trust funds I'd had from my parents.  With nothing to hold me back, I could finally have the kind of life I'd fantasized about all those lonely years. I moved to the City, as close to the center of gay life as I could get, a perfect little old house that was gracious but miles away from the stuffy neo-Georgian I'd grown up in, and set about decorating as I'd never been able to do at home.

What I hadn't reckoned on, however, was the pathological shyness that had kept me isolated all my life—it was not dependent on my grandmother, in fact it got worse without her around to force me to interact with people. Nor had I reckoned on my depression, a progressive condition I'd inherited from my mother and had been struggling with since my mid-thirties. These followed me into my new life and sewed me up tight in my pretty little house, where I had not one guest in seven years.  I only left the house to go shopping for groceries, sometimes for books or clothes, and to hide in a cafe when the cleaning ladies came in twice a week.

My entire social life was conducted online, as it had been before, though moreso now that I had no Grandmother to talk to.  But it was a pretty rich life, connected through my keyboard to people all over the world via a couple of message boards, a virtual reality world, and a succession of online video games.  I felt really comfortable opening up and talking to people in chat rooms and forums, clattering away at my keyboard with nobody able to see my increasingly overweight body or hear my ridiculous voice, hidden behind the freeing mask of digital avatars.

After the first year in my new home, I gave up on the idea of ever making face-to-face friends and ever having smart dinner parties, accepted my solitary state, and moved my desk out of the upstairs study to the bay window in the front parlor—mostly on the advice of my psychiatrist to expose myself to more natural light, but also because I realized I am a voyeur at heart, fascinated by people I'm terrified of speaking to but perfectly happy watching from behind glass, whether the glass is a TV screen, a computer monitor, or a window on a busy tree-lined street. 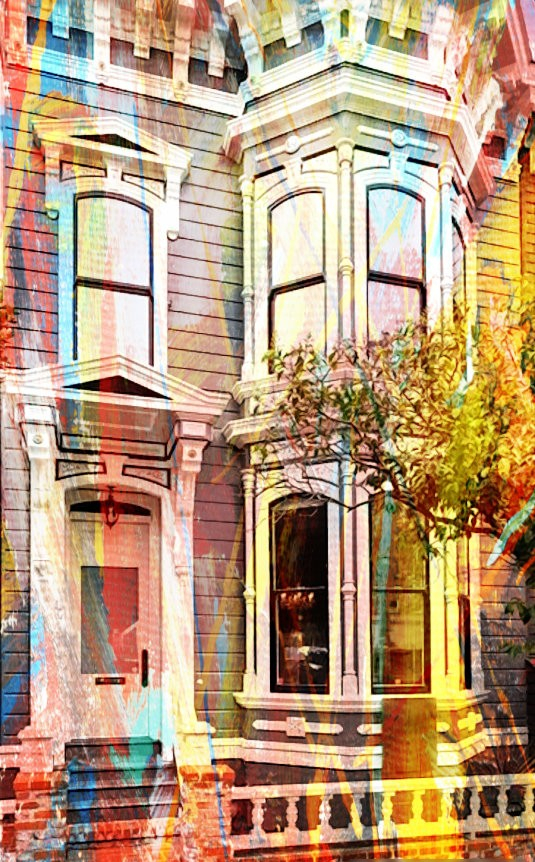 Posted by Robert Manners at 8:26 PM
Email ThisBlogThis!Share to TwitterShare to FacebookShare to Pinterest