The Boy turned up again on Monday, in a taxi this time, and earlier in the morning than he had before, so early that I was only half awake on my first cup of coffee.  But after a brief disappearance into the house, he came back outside and perched on the steps, just at the edge of my windows' view, and made a couple of calls on a slim little smartphone, texting or typing notes in between calls.  Dressed in a pair of battered Dickies overalls over a faded browny-gray thermal tee and venerable work boots, like the world's prettiest machinist or farmer, his hair up in its adorable bun, he looked like he was setting out to do some manual labor, heavy lifting or painting or installing things, that I dearly wished I could watch.

I got my camera and set up a shot, waiting for him to turn his head more in my direction so I could get the wonder of his face in three-quarter profile, everyone's best angle; but he didn't look around him, he watched the ground at his feet, presenting the delicious line of his neck and the dramatic angles of his cheekbones and jaw, but it was just not enough.  I took a couple of snaps of his lowered profile, enough to serve my needs as a desktop wallpaper for as long as this obsession lasted, but nothing I could share with my friends online to show them how beautiful he was.

Then I started feeling guilty for spying on him and taking pictures of him unawares, planning to share his likeness across the country without his permission or knowledge.  Creeper with a capital C, and though it was astronomically unlikely he'd ever find out what I'd done, my sense of guilt is well-developed enough that I'd always feel like he had found out and hated me for it.

So I put the camera away — keeping the profile shots to remind me of him after he had finished his job and disappeared from my orbit forever —  and just leaned my head on my hand and gazed at him over my coffee.  I can't swear that I didn't heave a couple of wistful sighs while I was at it, and it's quite possible I ran my fingers over my lips imagining what it would be like to kiss him. 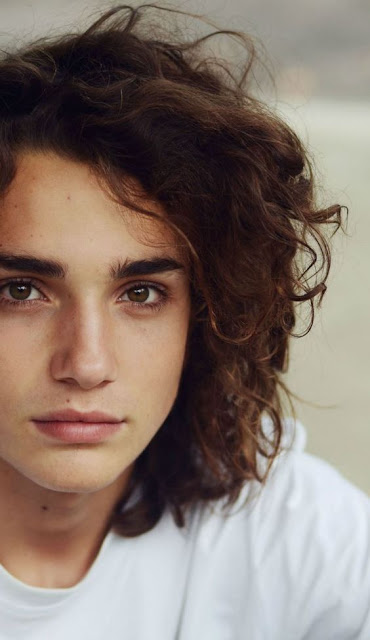 Posted by Robert Manners at 11:29 PM
Email ThisBlogThis!Share to TwitterShare to FacebookShare to Pinterest