I am currently wading through a small obsession with the Black Eyed Peas. Actually, I've liked them since 2004 when "Let's Get It Started" was all over the place, including the Democratic National Convention; they also appeared in (I think) a cellphone commercial that I really liked, where I was fascinated by their look: fashion-forward, exotic, unlike anybody else and even unlike each-other (Taboo is particular makes me feel all.... mmmph). And their music has depth and variety and musicality, things you don't ordinarily expect from hip-hop (or at least I don't).

But when I really fell in love with them was after Caroline fell in love with Fergie, and we listened to her album The Dutchess four or five times during our trip to Oregon last summer. I liked it, especially the song "Clumsy," but I didn't get wild for it. However, when Caroline was over one day a few months ago and looking up Fergie videos on YouTube, after playing the "Clumsy" video (which is really cute, you should see it), we started looking for Black Eyed Peas videos... and when I heard "Pump It," I was on iTunes within moments downloading it.


I love that video! That bit where apl.de.ap runs around in the circle of the rival gang, and when Fergie knocks them out with her boobs, I practically cheer.

But I have come to have a particular relationship with this song: it keeps coming on my iPod when I'm at the gym. The first time it happened, my first day back on the elliptical, I got my heart rate up so high the machine made me slow down; second time, it just got me going without threatening to bust my aorta; the third time I was used to it and it pushed me over the fifteen-minute hump. The song is peculiarly well suited for elliptical work... I could practically dance to the song without moving off the machine. It has become my mid-workout-pick-me-up song.

Not so good on the treadmill, though... it came on today when I was strutting my stuff and I almost tripped over myself a couple of times.

I wish I enjoyed the rest of their work as much. I mean, I do love "Let's Get it Started" (originally titled "Let's Get Retarded," and that's how it appears on the album Elephunk), and I get a kick out of some of their other top hits, but none of them stirs me as much as this one song. I guess that's a lot to ask of a band, to have a half-dozen or more favorite songs to their credit. 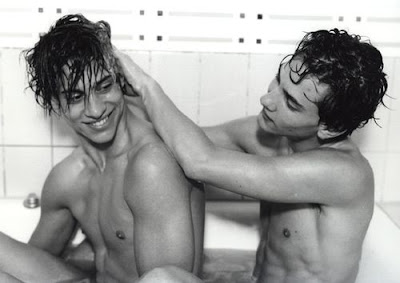 Posted by Robert Manners at 8:27 PM
Email ThisBlogThis!Share to TwitterShare to FacebookShare to Pinterest