I am and have always been very adamant about the importance of being Out to one's family, indeed to be Out to everybody one knows with any degree of intimacy. I think it's important not only to the advancement of gay rights but also to one's own self-respect.

But, shameful as this is, I myself am not entirely out, at least not to my entire family beyond the second degree of kinship. And right now, having just spent a few days with some of the extended family to whom I have never explicitly come out, it's really fucking with my self-respect to let this sin of omission continue.

As you probably know, I live with my Grandmother. She's very old and very set in her ways; and though she accepts and loves me as I am, it is despite the fact that I'm gay rather than including the fact that I'm gay. This has long been a sore spot in our relationship, and one that I would never advise someone else to put up with: but it is overpowered by all of the good in our relationship, so though I have a problem with her attitude towards homosexuality, I have balanced it against how many times she has literally saved my life, and chosen to accept it. I don't pretend I'm not gay, she doesn't pretend she accepts my homosexuality, and we simply don't talk about it.

But part of our "not talking about it" has come to entail my not talking about it to other people in front of her, or to people I know through her... such as people at her church and, more importantly, her immense clan of nieces and nephews and their descendants, some 150 people in three generations, most of whom I know personally. And I don't really hide the fact that I'm gay from any of these people, but neither do I say or do anything that would advertise or even just confirm it. And though this makes me feel like a hypocrite, I place it under the aegis of my love and need for Grandmother and let it slide.

This week I took Grandmother to visit some of her relatives... her niece Joann and nephew-in-law Nolan up in Redding, and her nieces Clarice and Jessica in Folsom. And I have to tell you, these are some of the nicest people you will ever come across: loving, happy, kind-hearted people who are just uplifting to be around.

But they are also conservative Christians... almost all of them. And not just lip-service Christians, but really involved Christians who read Christian literature and keep pray-for lists on their refrigerators next to the grocery list and have Jesus portraits on their walls, who serve as elders and ministers and missionaries in their churches (almost invariably Church of Christ, the same as Grandmother... not to be confused with United Church of Christ).

And worse, many of them have been duped by neoconservative media into espousing the radical right agenda of demonizing liberals, illegal immigrants, and gays. When I was at Joann and Nolan's house, I was glancing over their bookshelves, and there amongst the Concordances and Christian how-to's was Glenn Beck's Arguing With Idiots. And I nearly got into an argument with Clarice about the new immigration-enforcement law in Arizona.

I have a really hard time understanding how such kind people can subscribe to the bile spewed by people like Beck and Limbaugh and to a lesser extent O'Reilly... I suppose we all have our weaknesses, our little spiritual uglinesses, but it rather shocks me to hear it from people I love and admire, people who are otherwise so positive and kind.

And it got me to thinking, as I often find myself thinking when in the bosom of my Grandmother's family: how would they treat me if they really knew anything about me, if they knew from my own lips that I am gay? Would they still hug me and say how glad they are to see me and praise me for taking care of Grandmother so thoughtfully? Would they even allow me into their homes, around their children and grandchildren? Would they try to poison Grandmother against me, or respect Grandmother less for harboring me?

Tell the truth, I'd really rather not find out. And I really wouldn't want to risk hurting Grandmother by finding out: her family is incredibly important to her. I can just convince myself that they don't really buy into all of the things that the neocon haters say, that they aren't attracted to the Hate itself... they just feel reassured that there are people in the world who still supposedly believe in Christianity and traditional moral values.

But on the second leg of the trip, at Clarice's house in Folsom, we were joined by Jessica (who lives nearby in Placerville) for dinner. And during the course of conversation, Jessica told the story of how James Dobson of Focus on the Family had been duped into appearing on The Phil Donohue Show with the promise that he'd get to tell his side of the debate on corporal punishment for children (he's for it, of course), but was completely and very carefully crucified by the directors and Donohue himself... which actually inspired him to turn Focus on the Family into a media venture.

I knew about that episode, in fact the allowance for personal slant in the media and the problems that it causes is one of my hobby-horses; I agree that Dobson was treated badly and that Donohue should have had better sense than to skew the audience's reaction to his own personal values to such an extreme extent. But during this conversation, Jessica told us quite proudly that she is a member of Focus on the Family!

Now, I know that Focus on the Family does other work, Christian counseling on family issues being their raison d'être, and that this is what initially attracted Jessica to their group; but there is a reason that they are most commonly known as an antigay hate group: their position that homosexuality is a sinful and changeable state has been their most publicized position, and their work to supress gay rights their most visible activity.

That someone I know and love actually belongs to such an organization was devastating. I wasn't willing to get into an argument then and there, not in front of Grandmother and not spur-of-the-moment where I would be sure to say something irreparable in anger, and hear something irreparable said in anger (I had only bothered arguing the immigration law because it's not emotionally important to me), so I just went to bed and let them go on with their visit.

And as appalled as I was, I couldn't be surprised... as I sat and stewed on the situation, I remembered my aunt Judy telling me that Jessica was passing around pamphlets to do with some kind of Ex-Gay ministry at a family gathering a couple of years ago, thinking how tacky it was of her to do something like that at all but even worse to do it in front of me.

Of course, Jessica doesn't know I'm gay. She, like most of the people who believe as she apparently does, probably doesn't think she knows any gay people, that there are no gay people in her own family or community.

I have been stewing on this ever since... and the thing that really gets in my craw is that I feel like a coward and a hypocrite for letting something like this slide without doing something, or at least saying something. These people are running through life thinking that gays are some Other, something distant from them, unrelated, not quite human. They don't realize that we're all around them, in their families and their churches... and they don't realize that they're hurting us, even killing us, with their ignorance.

So my choice is this: writing to Jessica and entering into correspondence with her, using loving tones that will hopefully not instigate hostilities — that is the action toward which I am currently leaning, which has been advised by good friends to whom I've appealed for advice — but I'm not sure how to go about doing that, how to say what I need to say without attacking her beliefs; but I've also been advised to leave it alone for now, at least during Grandmother's lifetime, the threat of a shitstorm being more likely than the possibility of enlightenment, the likelihood of Grandmother being made unhappy so much greater than the likelihood of her relatives' understanding and learning — and so what good would be achieved?

What would you do? 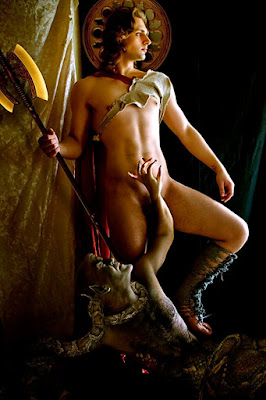 Posted by Robert Manners at 12:14 PM
Email ThisBlogThis!Share to TwitterShare to FacebookShare to Pinterest